Author Thomas Friedman travels the world for the New York Times and comes up with big picture insights such as in the book The World Is Flat, where he said the Internet had leveled the playing field for many people in the tech industries. Now he’s come up with a “field guide for the 21st century,” or a bunch of tips on how to keep pace with the dizzying pace of technology.

Friedman, the author of six bestsellers, came to San Francisco on Tuesday to talk about his new book, Thank You for Being Late: An Optimist’s Guide to Thriving in the Age of Accelerations. When he writes and talks about technology, I don’t think he shows a tremendous mastery of the subject. On the other hand, he shows more understanding than our presidential candidates did, and you can’t beat him when he tries to frame the significance of technology amid the forces of globalization, climate change, and societal change.

I think of Friedman’s books as self-help guides for your zeitgeist, or your views of how the world works. I used his theme of The World Is Flat in my talk about the regional game economies of the world. He travels the world, pulls back, and delivers his big picture. His view in his latest book is that the accelerations in the world will bring us new riches and tremendous burdens as a society. 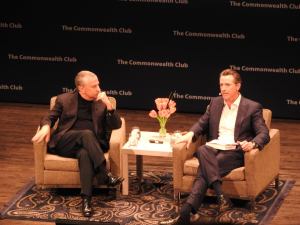 The title of the book comes from the time that he takes to pause and think when someone is late for a breakfast or another appointment. When you press the pause button on a computer, one of his friends said, it stops. When you press the pause button for a human, it starts. Reflection begins, and the moments gave him time to think about our accelerated world and “how the machine works.”

Friedman wrote three editions of the bestselling The World Is Flat, but he said he missed some of the huge changes that happened in 2007 because of the ordeal of 2008, when the global economy melted down.

“In 2007, it goes over a cliff,” he said. “It was the biggest technological inflection point since Gutenberg invented the printing press.”

In 2007, the cost of sequencing the human genome started dropping dramatically, from $100 million in 2001 to less than $1,200 in 2015. That coincided with a dramatic drop in the cost of data per megabyte and a big increase in data speeds. 2007 was a momentous year that gave us things like Facebook, Airbnb, the iPhone, IBM Watson, Android, the Amazon Kindle, Hadoop, Github, and many other things that started driving the cloud, or Internet-connected data centers that enable our mobile devices to connect with enormous computing power. 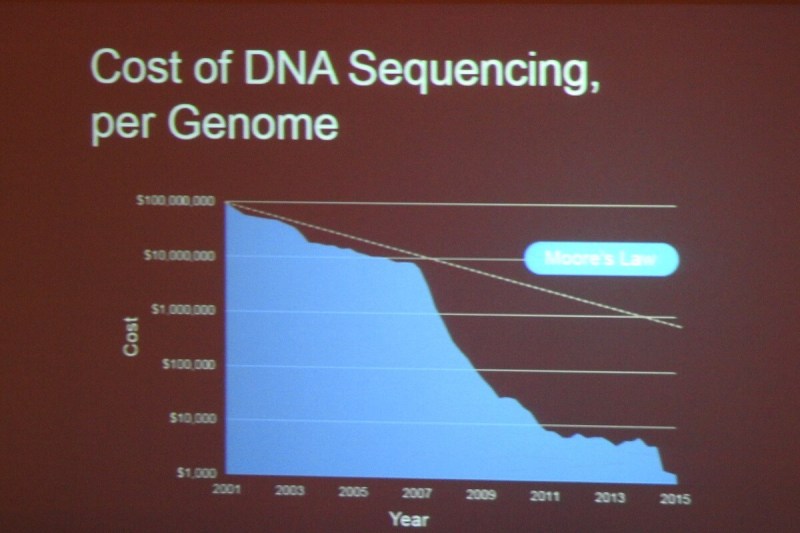 Above: The cost of DNA sequencing has fallen dramatically.

“I don’t call this a cloud,” he said. “I call it a supernova,” a force of nature that has forever changed our world. It set in motion the huge spread of information, social networks, artificial intelligence, and new technological marvels. The drop in bandwidth prices after the dotcom collapse and Great Recession led to the “accidental wiring of the world.”

The world’s rapid changes are coming about because of several “hockey sticks” in growth. One of those is the rapid growth of the population in the world, which now stands at 7.4 billion, up from 6.1 billion in 2000; it’s projected to hit 8.5 billion by 2030 and 11.2 billion by the year 2100. Another hockey stick is Moore’s Law, or the doubling of the number of components on a chip every couple of years — the source of the electronics revolution that has driven technology at such a breakneck pace. And the third big one is the hockey stick of globalization, with the growth of the world’s markets.

Asked by moderator Gavin Newsom, the lieutenant governor of California, if he was worried about the threat of artificial intelligence to take away jobs, such as those of millions of grocery store cashiers (see Amazon’s grand plan for that), Friedman said he was. He is concerned that technology is moving too fast, and it is moving ahead of society’s ability to adapt and change with the times. 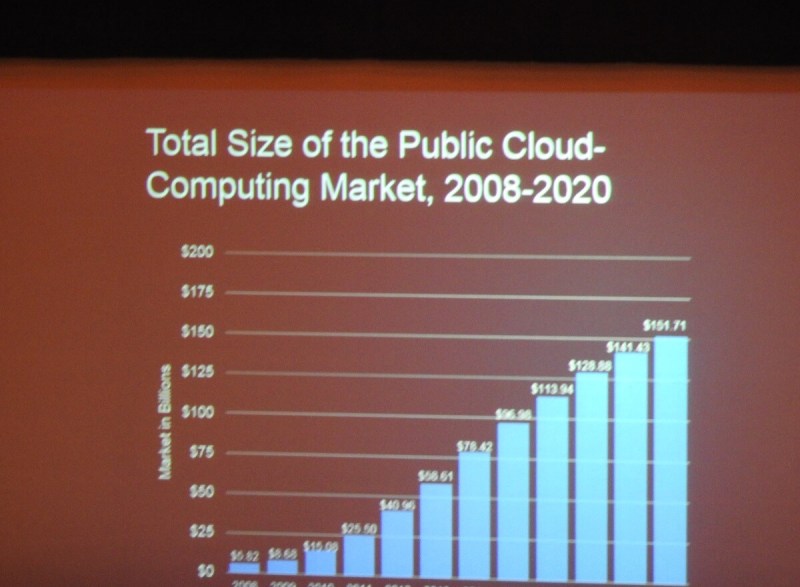 Above: The growth of the public cloud.

His example of intelligent assistance is the human relations policy at AT&T, where you can get a lifetime job at the company if you commit yourself to a lifetime of learning. He said that the advances in online education with Khan Academy — where you can get free coaching for the SAT exam — just need to be shared and scaled to the whole world so that our kids don’t wind up with college debt that lasts for half their professional careers.

He believes that we should expand the safety net, including giving everyone single-payer health care, but we should also drastically change the tax system to encourage entrepreneurs. He said he would be happy if we abolished all corporate taxes and taxed only sugar, bullets, financial transactions, and carbon emissions. Everyone, Friedman said, should embrace the “startup of you” and commit themselves to adapting and reinventing.

He believes that people have to adapt. He chose a career, for instance, but his daughters had to invent their careers and invent their jobs. He doesn’t think his kids will be able to stay in the same place for 36 years as he did.

He noted the “power of one” was amplified by the Internet, giving a single person great power to be a force of nature. We are moving to a world where everyone is connected but nobody is in charge, he said. 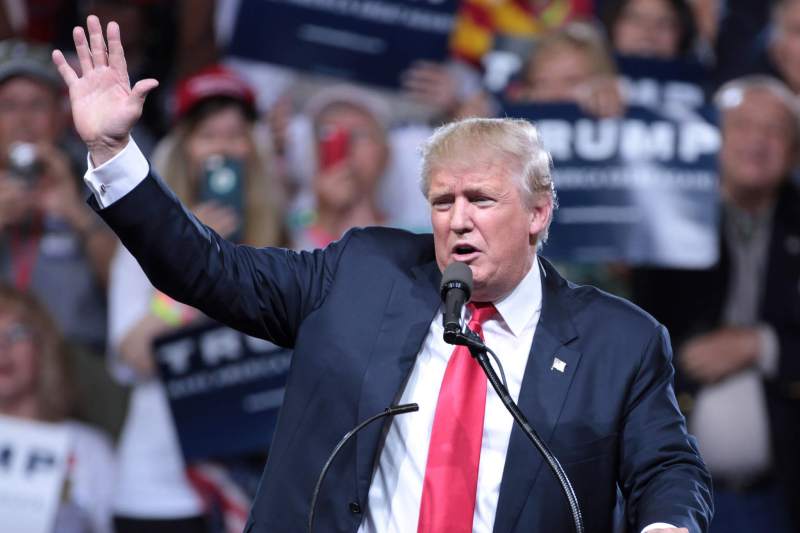 After 1945, we were in a position where one country could have killed all of us. Sadly, he said, one amplified person will eventually be able to “kill all of us.” But he also said that the collective power of human beings will be able to save every person in the world.

That prompted him to hope that the human race embraces the Golden Rule, or some form of it, so that kindness and community scale to cover the whole world, rather than destructive power.

As for the presidential race that brought us Trump, he said that he spent three decades covering the Middle East, and when he returned to the U.S., he was weary of all the rollbacks of peaceful changes in the region. Now, he said, he is fearful that he sees the same tribalism between political parties — the Democrats and the Republicans — that he saw among Sunni and Shiite Muslims in the Middle East.

The collapse of 2008, with the mortgage crisis that wiped out so many middle-income people, gave us the Tea Party, or the Republican movement to steer the country in conservative directions. And that, he said, gave us the results of our recent election.

He suggested that Trump was beginning to “play with big systems” when he started tinkering with 50 years of peaceful coexistence by doing things like questioning the U.S. commitment to the North Atlantic Treaty Organization and calling up the Taiwanese leader and angering China. That’s an ominous thought that brings an end to any dinner party, he said.

Discouraged by what is happening around the world, Friedman fell back on the topic of community. He returned to his idyllic childhood hometown in Minnesota and tried to discover if it was still idyllic. He found that his old neighborhood, St. Louis Park in Minneapolis, had changed from a combination of 20 percent Jewish people and lots of Scandinavian heritage people to a neighborhood with more Latinos and Ethiopians. It had a big challenge in absorbing that diversity, and he was encouraged by how it was doing so.

Changes are going to come, and the question is whether they will be done by you or to you, he said. And Friedman said the big climatic changes are producing a hurricane of change, but his book is optimistic in that he believes that people can learn to adapt and live in the relative calm in the eye of the hurricane. He said the book is a manifesto on how to live in the eye, rather than trying to build a wall to keep out the hurricane.