The New York Times announced today that it will syndicate VentureBeat‘s content, as part of a redesign of the Times’ online technology section.

This is great for VentureBeat. The Times has long represented excellence in the news profession. The partnership is an endorsement of something we’ve been working hard to achieve, which is to publish content that is credible, edited, engaging and informative. Second, by placing VentureBeat articles on the front of the Times’ tech page, the deal supplies us with potentially millions of more readers, and brings the companies we write about tons more exposure. The Times, in turn, gains access to our daily scoops on the latest in the Silicon Valley-tech scene. It has rights to pull in a good portion of our articles to its site, and in return, those articles on its site will carry links back to VentureBeat. As part of the same redesign, the Times will also syndicate content from blog sites GigaOm and ReadWriteWeb. Beet.TV has an interview with the Times’ Vindu Goel, who explains why he made the move.

While the Times is making the redesign and syndication announcements today, it will take a couple of more weeks before it actually begins pulling content in from Venturebeat.

This adds to VentureBeat’s range of syndication deals, which already includes a deal with IDG’s tech portal Industry Standard and several other sites.

NYTimes.com had 19.9 million uniques in August, and 638 million total page views, according to Nielsen, making it one of the largest news sites in the world. The site reaches one in nine internet users in the U.S.

The Time is making a range of changes. It extended the TimesPeople social networking features across the site (see image below), adding Digg-like recommendation and rating to its news stories.

It said it is also adding an Economy section and Green Inc., a blog on energy and the environment, and enhancements to The Times’s mobile site. In the coming months, it says, NYTimes.com will expand the Small Business, Personal Technology and Your Money sections, introduce more journalists, deepen coverage within its DealBook franchise, and continue to add new tools and multimedia features. 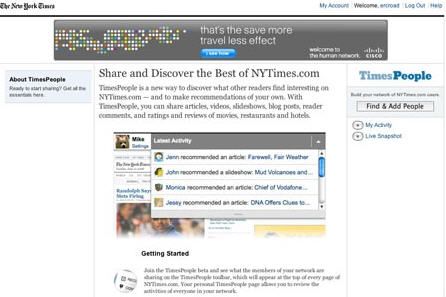