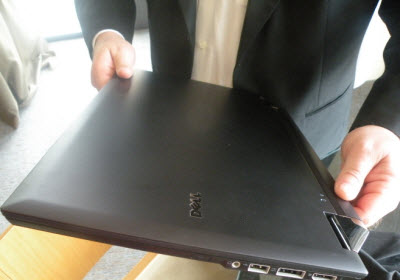 The newest enterprise-focused laptops and desktops from Dell have been designed with “consumerization” in mind. That means Dell’s enterprise customers no longer want dull, boring computers. The new corporate computers are designed to be sleek, attractive and lightweight.

That’s a consistent theme in the computers Dell is launching today for business users. After all, says Todd Forsythe, vice president of life cycle management at Dell, business users are also consumers and they don’t want boring and bulky computers any more than anyone else does.

The company hopes that these new machines, upgradeable to Windows 7 operating system launching on Oct. 22, will inspire a resurgence in small business and corporate PC buying.

The cream of the crop is a 16-inch laptop, the Dell Latitude Z, billed as the thinnest and lightest corporate laptop ever built. It is a half-inch thick and weighs just 4.5 pounds, which puts it in competition with Hewlett-Packard’s recently launched Envy laptop computers. 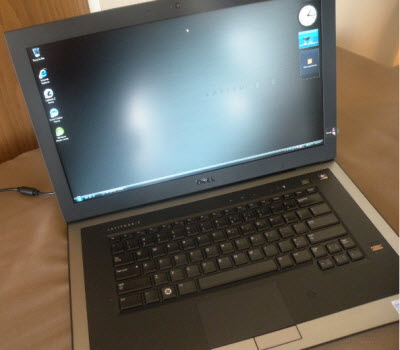 The chassis is made of magnesium alloy, and it has a chrome metal hinge on either side. The hinges house the Ethernet jack on one side and the power plug on the other. There is a single vent with two fans that send air out through the side. One of the cool things about it is it can wake up instantly. When you open it, the computer activates your email, calendar, contacts, or the web. You can put a password to protect it, but you don’t have to boot Windows to view those items quickly. The battery life lasts four hours on a four-cell battery and eight hours on an eight-cell battery.

Another new 16-inch laptop is the Dell Latitude Z600 (right). This $1,999 computer can charge inductively as it sits upon a dock. That means you just place it on top of the dock and it fits into a power coil that does the charging. It comes with EdgeTouch, a touch-sensitive bezel that surrounds the screen. If you run your finger down the bezel, you can scroll down a web page. The machine comes with a two-megapixel camera with Face Aware software. That means it recognizes if someone is sitting in front of it. If someone new comes in, it will ask for a password again. The machine also has a fingerprint reader and a business card scanner. 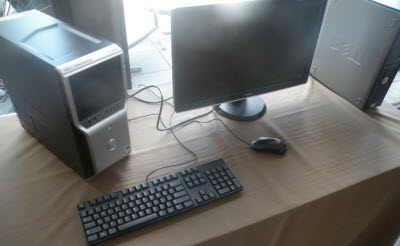 The charging dock sells for $199. The laptop works with a wireless dock, which allows you to wireless connect the laptop to another monitor. The wireless dock, sold separately for $199, will be available in a few weeks.

Dell is launching its Precision T1500 (pictured, on left), an entry-level workstation desktop at $949. It is built to run engineering applications such as AutoCAD. Dell is also launching an Optiplex 780 desktop computer (pictured, on right) for the enterprise. The computer is aimed at bringing down the cost of maintaining computers in an enterprise.