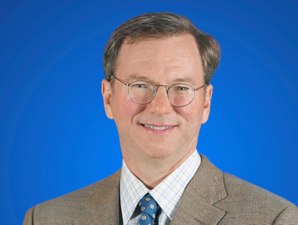 I’m delighted to announce that Google Chief Executive Officer Eric Schmidt has agreed to speak at our GreenBeat event on Nov. 19, which focuses on the overhaul of our nation’s electrical grid.

Schmidt has been a vocal proponent of our nation’s need to invest in a cleaner, more efficient electrical grid, arguing that it part of a “second industrial revolution” that, if done properly, will create jobs and new industry.

In fact, Google has emerged as an aggressive player on the grid in its own right. It recently launched PowerMeter, a tool for consumers to gauge the amount of energy their various household devices are using with a central, online dashboard. In the U.S, you can get PowerMeter easily by buying the $200 device called TED 5000 (manufactured by Energy Inc.). The device is so popular that it is back-ordered right now (we’re trying to get one, and will let you know what it’s like. The home energy management system is rolling out to thousands of households this year. You can also get it in the U.K., by buying an AlertMe system).

Schmidt’s support for investments in the nation’s energy infrastructure comes at a crucial time. A majority of scientists say it urgent for us to shift our energy reliance from carbon-based sources to renewable sources, but the U.S. Congress appears to be stalling on legislation that would push this forward, blocked by special interests. Sadly, many U.S. states, represented by both democrats and republicans have businesses and utilities that rely on fossil fuels for their main energy supply or significant revenues. They fear a shift would hurt their businesses.

Schmidt has been avidly supporting the Obama administration’s smart grid initiatives over the past few weeks, for example going on MSN, and saying that such support is a big deal because our existing grid was built in the 1950s and 1960s and it’s important that we upgrade it for the digital economy — especially now that we’re moving to a two-way grid that allows people to feed their own solar and wind-generated power back to the grid. More sophisticated communications are needed for this. He also invited Energy Secretary Steve Chu to speak at Google last week (see video below). Google is seen as such a formidable player in the space that Chu chose it as his venue to announce $151 million in grants for global warming projects.

We recently covered Schmidt’s argument that in fact, the cost of legislative measures will be relatively minor, and the benefits huge. Schmidt uses California as an example: It leads the nation in efficiency, has established strong renewable energy requirements, and decoupled utility revenue from how much power customers use (giving utilities an interest in helping people conserve). As a result, consumers and businesses alike have redirected their energy spending to other goods and services, creating more than a million jobs with a payroll of more than $45 billion, according to Schmidt. (See Schmidt’s column written with his wife Wendy, here.)

The California Air Resources Board, the agency responsible for implementing a law that will reduce California greenhouse emissions to 1990 levels by 2020, predicts $33 billion in increased economic production as a result of the policy, Schmidt noted. In addition, the state’s gross product will increase by $7 billion, and personal income will grow by $16 billion.

By the way, you can get early-bird discount tickets for GreenBeat here, until Nov. 5.

Here’s that video of Chu at Google: