Watchitoo, which lets distant friends see and discuss content simultaneously in a shared window, is opening to the public today. (We covered the service in May, when it was in private beta testing.)

The site lets you search for YouTube videos or upload photos from your hard drive and see them on live web cam with friends. You can see how your friends react the way you might if were sitting next to each other on the couch or in a movie theater.

“Traveling around the world, I wished I could have something that would let me chat with my family while showing them photos and video,” said chief executive Rony Zarom.

With the public launch, the New York company is allowing higher resolution photos and video and a full screen mode. Zarom said Watchitoo could pursue a number of revenue models: It could have a consumer-facing approach where users buy premium offerings like higher resolution video streaming or music. It could white-label the site or build custom versions of it for other content providers that want a Watchitoo-like environment for their media.

Watchitoo could also be an inexpensive video conferencing alternative. The site has other built-in features for collaboration that let you send sticky notes and reminders to other friends or conduct webinars. Watchitoo is a hybrid — it’s competing with more conventional content-sharing via e-mail, RSS or Twitter. On another level, it’s comparable to Skype, Meebo or Paltalk, yet centered on content.

Like Paltalk, which is profitable and recently bought back shares from investors, the white-label or corporate route might prove more lucrative for Watchitoo compared to the more difficult approach of convincing users to buy music or make it a daily destination site.

Zarom funded the company himself through Decima Ventures after scoring with his previous startup, Exalink, which sold to Comverse for $480 million in 2000. 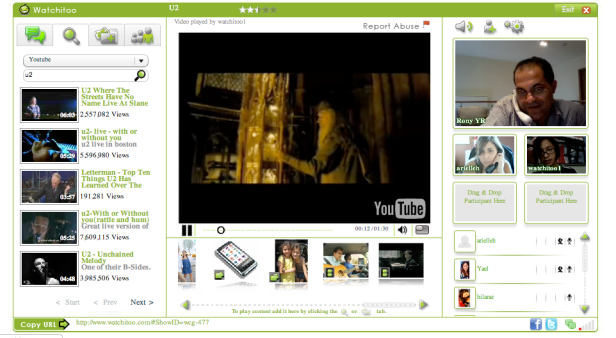