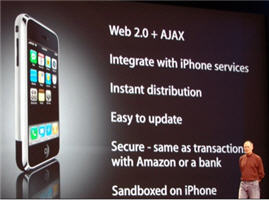 There was plenty to chew on from Apple’s WWDC yesterday.

Chief exec Steve Jobs said Apple would release a version of the company’s Safari browser for Windows (update: vulnerabilities are already being found in the new browser). Safari will also help with mobile applications for the iPhone, he said: “It’s all based on the fact that we have the full Safari engine in the iPhone…And so you can write amazing Web 2.0 and AJAX apps that look and behave exactly like apps on the iPhone, and these apps can integrate perfectly with iPhone services. They can make a call, check email, look up a location on Gmaps… don’t worry about distribution, just put ’em on an internet server.” (Update II: And there’s skepticism about the iPhone’s ability to be a revolutionary platform for developers.)

Critics were disappointed, however, that this means developers will have to write two separate programs, one for the Macintosh computers and one for the iPhone. There’s more detailed coverage at Engadget, which carries the iPhone comments at the bottom.

Releasing iTunes on Windows has benefited Apple tremendously, so this is an extension of Apple’s strategy to embrace Windows.

Jobs also talked about Leopard, the company’s update to its Mac OS. Dean Takahashi of the Merc has a more succinct summary than Engadget’s live coverage — providing a look at the “Finder” and “Quick View” features, which make for easier file sharing and previewing compared to Microsoft’s Vista. Leopard’s widget feature, which lets you track changes at various Web sites directly from your desktop, is also more sophisticated than Vista’s equivalent. Leopard includes “BootCamp,” a way to let Mac users choose which operating system to run when they start their computers — Windows or Mac OS (see story by Troy Wolverton).