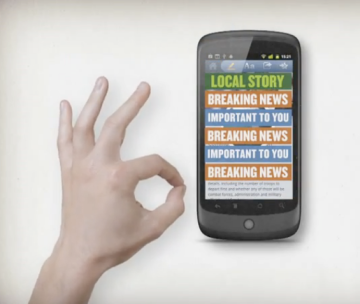 This article is part of a series of posts about DEMO alumni and news of their progress. News360 launched at DEMO in Spring 2011. Check out more at DEMO.

News aggregator News360 rolled out a major update to its web, iOS and Honeycomb tablet apps today. The app now discovers and personalizes news without you lifting a finger, except maybe to open the app on your device.

According to chief executive Roman Karachinsky, there are three ways to discover news online: You can search, but only if you know what you want to read. RSS feeds allow you to scan headlines if you know what publications you already like. Social media lets friends give you content to read, but it’s tailored to their interests.

But Karachinsky saw the need for a fourth way, one in which the news you are most interested in comes to you. Enter reverse search.

“We think that reverse search is a way to bring readers quality content that they would not have gone looking for, but that is highly relevant to them,” Karachinsky told VentureBeat.

News360 analyzes data pulled from a user’s Evernote, Facebook, Twitter and Google Reader accounts to form what it calls an interest profile. From there the application matches an article using its semantic analysis monitor. This filter looks for nuances such as tone, subject, source and author preferences. Once it verifies an article as interesting, News360 recommends it to the reader. 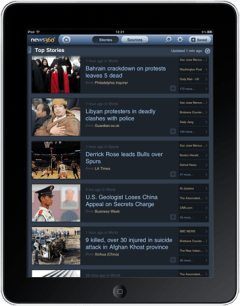 The app’s profile of you is not static. It is  constantly changing your feed to reflect your evolving interests.

For example, if a friend gets you interested in architecture it will reflect in your social graph and prompt New360 to start providing you with relevant content.

News360 competes with big name products like AOL Editions, Flipboard and Taptu, but Karachinsky believes the reverse search method may be what pushes the company ahead.

“Where we really differ from those models is in serendipitous discovery,” he explained, “You don’t have to know what you’re looking for to get a tailored news experience.”

This update is only available for News360’s tablet and web apps, but Karachinsky says readers will soon see the same functionalities on the iPhone, Android smartphone, Windows Phone 7, and Blackberry apps.

News360 launched at the DEMO conference in 2011 and is headquarted in Silicon Valley, though its research and development team remains in Moscow. News360 did not disclose its funding, but did say a seed round came from Oradell Equities, a Russian venture capitalist firm.