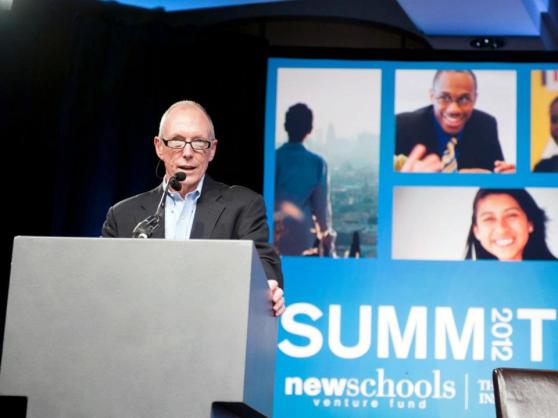 Selling technology to schools is still a formidable task, but it’s a far less expensive and extended process than it used to be.

And because of this friendlier climate, we’re seeing the second wave of education technology tools and a surge in interest from businesspeople and entrepreneurs. But the education field only received 1 percent of venture capital funding between 1995 and 2011 — and educational startups still face a critical shortage of resources.

Oakland, Calif.-based NewSchools Venture Fund was formed 15 years ago to fund technology intended for K-12 schools. To meet the needs of educators and entrepreneurs, the nonprofit discussed its expansion plans this week, including strategic partnerships with venture firm Rethink Education and Zynga.org, the charitable arm of social-game publisher Zynga.

“Education is undergoing a long-awaited revolution,” said NewSchools’ CEO Ted Mitchell [above]. The partnerships will merge “cutting-edge technology with forward-thinking capital on behalf of kids’ learning,” he explained.

Most interesting is the agreement with Rethink Education; according to a release, the New York-based venture firm with $50 million under management will provide a “significant portion of the fund’s carried interest” to New Schools. Rethink Education will hand over an unspecified percentage of its profits from its investments in its portfolio, which includes Pathbrite and EverFi.

“This marks an unprecedented step in the alignment of public and private education investors and a powerful alliance between the two booming education technology centers of New York and San Francisco,” said Rethink Education managing partner Rick Segal in a statement. 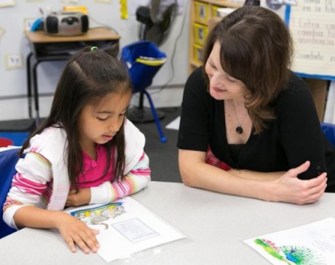 Mitchell didn’t provide further insight into the terms of the deal, but he said the donation is “certainly generous” and will boost seed and early-stage funding.

In concert with Zynga.org, NewSchools also just launched a learning games accelerator. Zynga will provide the office space, access to product managers, and $1 million in capital for the first year. Zynga CEO Mark Pincus made the announcement Wednesday, and he referenced the surge in enthusiasm for educational games. “Everybody at Zynga is passionate about having a positive world impact,” he said.

In lieu of the recent announcements, VentureBeat reached out to NewSchools for insight into its investment thesis.

“A few years ago, our inbound deal pipeline was one or two startups a week” said Jennifer Carolan, the partner who leads the firm’s seed fund. “Now we’ll get 15 calls.”

Carolan said they regularly meet with educators to ask about the gaps and pain points. She said infrastructure is still a “massive problem” in schools, so analytics and cloud-based technology is of keen interest. Another focus for the seed fund is high-quality content, including a curriculum to help students learn to code. Carolan also noted the “unprecedented, rapid growth” of the tablet, and will invest in technology for special needs children.

In the previous ed-tech wave in the 1990s, school districts spent the majority of the budget on hardware, not software. Now it’s the opposite. As a result, “technology is finally reaching kids and impacting learning,” Carolan said. “The goal is for kids to become content creators — not just consumers.”