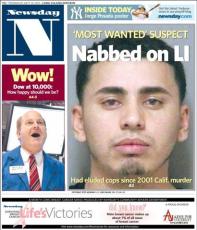 The ink-on-paper version of Newsday is America’s 11th-largest newspaper. It serves Long Island and Queens a workingman’s view of the news more akin to the New York Post and Boston Herald than the New York Times or the Boston Globe. Typical headline: “Cops: Doc Bought Cocaine From Nursing Assistant.”

Still it’s a serious and influential newspaper, read by an estimated 377,000 people daily — possibly the largest audience of any suburban paper. Bill Moyers used to work there.

But Newsday’s attempt to drum up Wall Street Journal-style paying subscribers for its website has turned into a comedy far beyond the failure of The New York Times’ TimesSelect. Newsday’s $4 million redesign launched last October forced visitors to sign up for a subscription to read Newsday online. The price for an online-only subscription: $5 a week.

The number of people who’ve signed up in the past three months? 35.

Newsday execs said, in a dryly giddy report written by the elitist New York Observer, that part of the problem is that 75 percent of Long Islanders qualify for a free subscription. Newsday.com is free to anyone who subscribes to the paper or has Optimum Cable service, which shares ownership with Newsday.

But obviously, Newsday’s management knew this going in, and they planned to sign up thousands of subscribers.

The Observer article goes off topic on a pile-on of everything not right at the paper and skips the important analysis: The Wall Street Journal has proven it can sign up online subscribers by the million. The New York Times will probably be able to do the same. But that won’t be true of every other publication.

I’m hoping Newsday turns up on Apple’s tablet tomorrow, so we can see how many people read it there.