The number of gamers around the globe will top 3 billion by 2023, according to market researcher Newzoo. It may sound crazy to expect 39% of all humans to be playing games, but Newzoo says we already have 2.69 billion players thanks to mobile devices. And like it or not, new players are born every day, and those who aren’t playing are becoming a smaller part of the overall pie.

Demographic change is driving this trend, as most young folks play games. The game market is expected to generate $159.3 billion in 2020 and exceed $200 billion by 2023, Newzoo said. The growth is being driven by mobile games and huge hits such as Fortnite, League of Legends, and Pokémon Go. During the pandemic, the numbers are growing at an accelerated rate.

By the end of this year, we’ll have 2.7 billion gamers worldwide, with 2.5 billion playing on mobile, 1.3 billion playing on PC, and 800 million on console. (That adds up to more than 2.7 billion because people play on multiple devices). Thanks to growth markets in regions like Asia-Pacific, the Middle East, Africa, and Latin America, this number is on track for even further growth in the coming years.

Growth markets are contributing more to this player increase (compared to more-mature markets). Growing online population due to improved (mobile) internet infrastructure, affordable (smart) phones, and a growing middle class are key drivers for player growth. In 2019, for example, the number of players in the Middle East and Africa outpaced the number in North America. In 2022, the Middle East and Africa will have surpassed even Europe’s player numbers.

However, Newzoo said that many players in these growth markets are entering gaming via mobile, whose free-to-play monetization model makes it notoriously difficult to convert players into payers. The global number of players is expected to grow 5.3% year on year in 2020, predominantly driven by the regions with the most emerging markets.

The games market is continuing to move away from boxed revenues. While the move from physical to digital distribution is definitely part of the equation, the increasing dominance of in-game revenues will shrink even full-game digital revenues in the coming years. 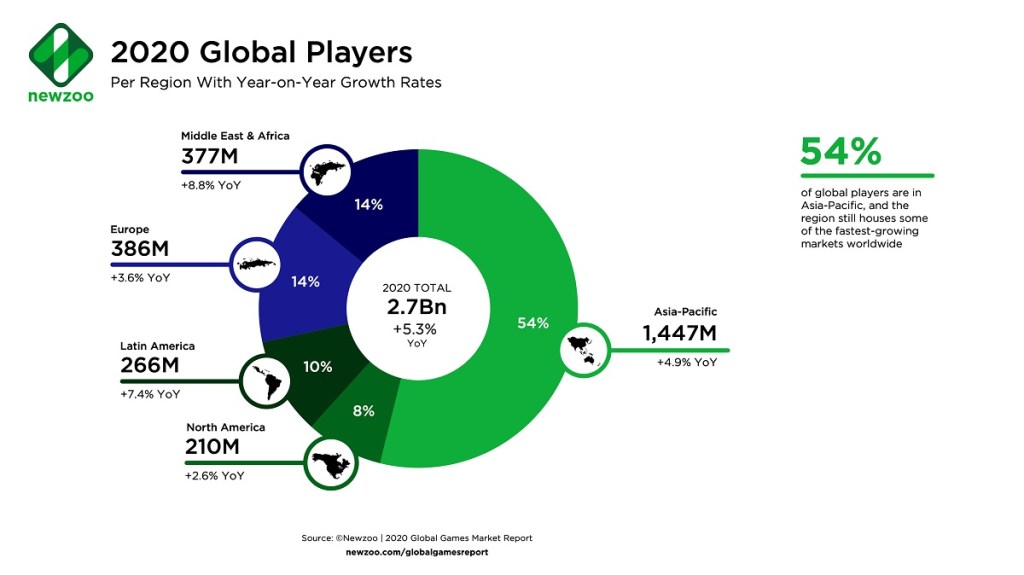 Above: Newzoo’s gaming numbers by region.

In the coming years, Newzoo expects in-game-transaction revenues to increase even further in popularity on console, especially as publishers and developers will look for alternative revenue streams when subscription revenues replace full games sales for many of them.

Unsurprisingly, in-game transactions generate the most revenues on mobile by a wide margin. After all, boxed games don’t exist on the platform, and full-priced digital games are few and far between.

The market for premium (paid) games on mobile is growing through subscription services like Apple Arcade, digital board games, and ports from other platforms — but that growth is marginalized by the growth of free-to-play games on mobile.

In fact, 98% of all mobile game revenues were generated through in-game transactions. Newzoo forecasts this to edge ever closer to 100% as the years progress. Nevertheless, paid games on mobile will always have a place.

Subscriptions will account for 13% of console revenues this year

Together, the subscription services on console will generate $5.8 billion in 2020, which accounts for 13% of the console market and 4% of the overall global games market. 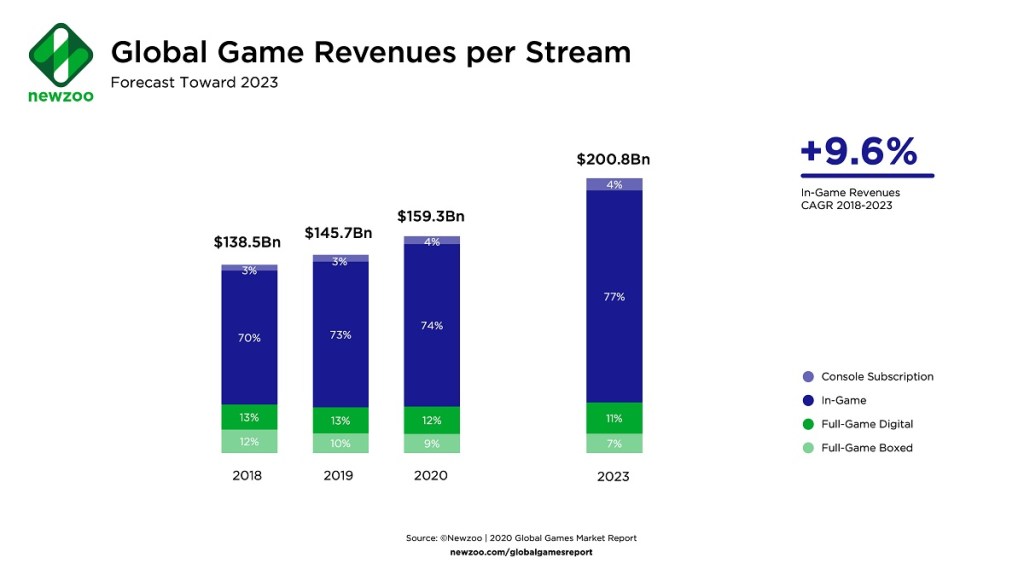 Above: Global revenues per stream.

Subscription revenues depend heavily on the availability of certain services in specific markets, which causes a significant difference in revenue share per country. Services are usually available first in regions with the biggest spenders on console, which is why the share of subscription service revenues is highest in more-mature markets.