Players are spending more time in games, and it turns out PC shooters have become more popular during the pandemic. But total esports revenue for 2020 will likely be lower than previously forecast, according to a couple of reports by market researcher Newzoo. 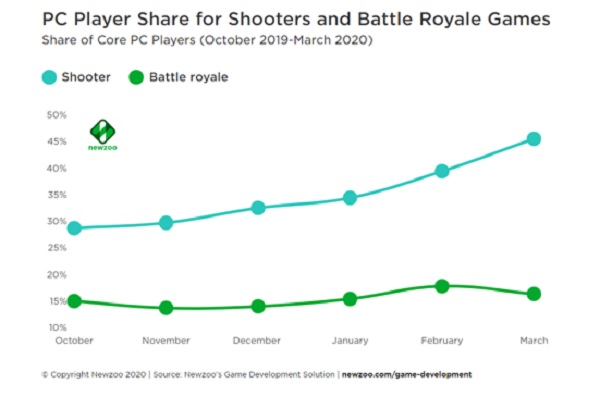 Above: Shooters are taking off in quarantine.

Between December and March, every genre of 18 that Newzoo covers saw growth in player share on PC — except multiplayer online battle arena (MOBAs) and fighting games.

The report is based on a survey of 1,204 gamers in the U.S., Italy, and Japan — ages 10 to 30. Given the influx of new players and viewers, many different game genres have seen growth in viewership, player share, and average play time, Newzoo said.

The deck-building growth was almost solely driven by the success of Riot Games’ Legends of Runterra, and platformers were similarly boosted by the Ori series. 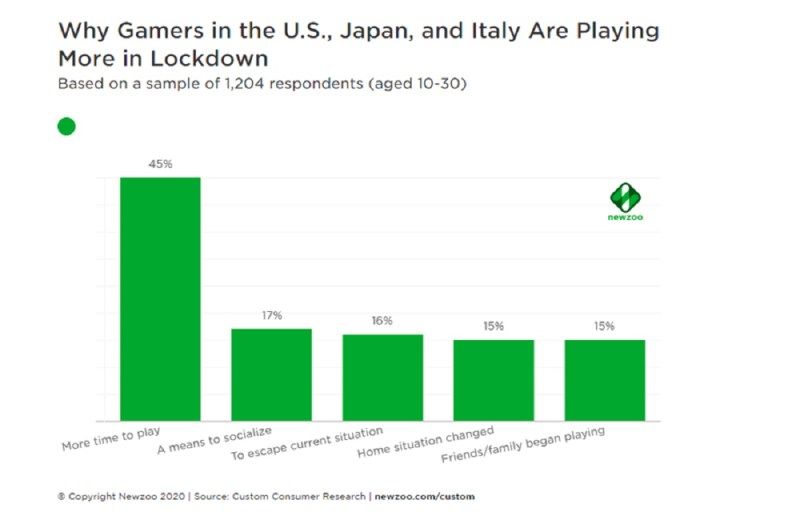 Above: Gamers are playing more in lockdown.

Newzoo said that on the PC, the shooter genre had a player share of 46% in March, making it the second-biggest genre (after MOBA).

Driven by its free-to-play model and almost-ubiquitous coverage from shooter-focused streamers, Call of Duty’s Warzone performed extremely well in terms of player share, player numbers, and viewership. Activision said it saw 50 million downloads in a month.

Newzoo said the free-to-play game mode’s success may have been accelerated by self-isolation, due to several factors that consumers may find appealing during the lockdown period, such as being a squad-based game that requires communication. It’s also a cross-platform title, with quick gameplay in a big open map. Overall, average daily play time for shooters grew from 38 minutes in December to 60 minutes in March.

Racing is another genre that saw a significant increase in player share. Kartrider, for example, had a boost. The game is accessible, cooperative, multiplayer, and easy to play with friends during isolation. The title of choice for many pros is iRacing, and interest in the title has skyrocketed this past month, with an increase of 117% for live hours watched on Twitch and YouTube from February to April. 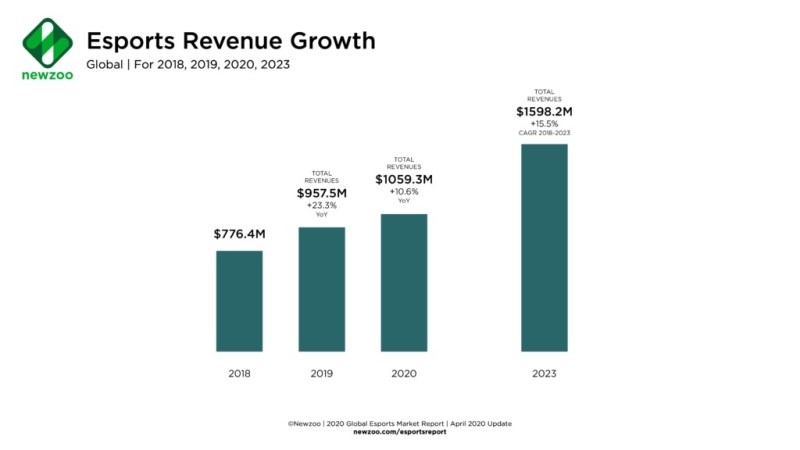 Above: Newzoo is revising its forecast for esports.

Newzoo also said that it updated its global and regional esports revenue estimates for 2020. The company now estimates that the global esports market will generate revenues of $1.059 billion in 2020, down from the previous estimate of $1.100 billion.

At the same time, Newzoo adjusted its 2023 forecast upward slightly, from $1.556 billion to $1.598 billion. The pandemic has taken a toll on live in-person esports events, which have been forced to close.

“Before continuing, we must stress that our revision has nothing to do with decreased demand (the audience is not smaller) or decreased supply (the number of events organizers want to put on is not fewer),” Newzoo said. “Rather, due to the ongoing COVID-19 outbreak, many events have been postponed, canceled, or moved to online formats.”

The revision is based on a temporary cessation in esports activity (or a transition to digital-only events). After 2020, the immediately impacted revenue streams will remain unchanged from the previous forecast.

Newzoo expects less merchandise and ticket revenue, with revenues going downward from the previous forecast of $121.7 million to $106.5 million. The research firm also revised media rights and sponsorship forecasts for this year — down from $185.4 million to $176.2 million and $636.9 million to $614.9 million, respectively.

Newzoo also increased its forecast for global publisher fees to $120.2 million in 2020.