It will also be because of PlayStation and Xbox.

Highlights from the report include:

Consoles lead the way for U.S. 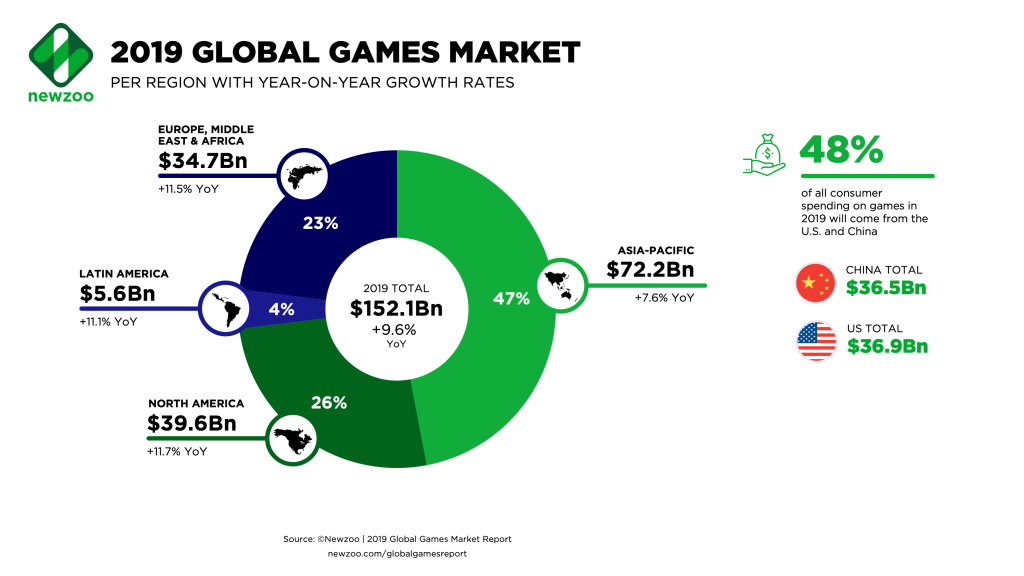 Newzoo forecasts a 13.4% growth for consoles in 2019. Part of this comes from the launches of the Project Scarlett (the codename for the new Xbox) and the expected release of a new PlayStation console from Sony. Nintendo may also put out new versions of the Switch, its successful hybrid console. Wijman said this big number is about more than new boxes.

“It’s expected spend on newly released games, mostly in the first half of 2019, plus added revenue from new console users due to the battle royale hype,” Wijman said. So the likes of PlayerUnknown’s Battlegrounds and Fortnite will still move systems, but Newzoo also see new models, like cloud gaming, boosting revenues.

The PC, it turns out, doesn’t play much of a role in the U.S. overtaking China in this forecast.

“Almost none,” Wijman said. “Growth in PC spending is largely flat compared to other segments. And PC spending was less impacted by the freeze due to the relative long lifespan of PC games — the most popular PC games in China were already approved a while ago.”

The freeze in game licenses in 2018 hurt the Chinese market, providing a chance for the U.S. to pull ahead of it. Newzoo also says that efforts to limit screen time for children will also have an impact.

It is in Tencent’s interest right now to expand beyond Chinese borders, so we do expect the company to capitalize on opportunities when they present themselves. Due to the continued cash flow from its activities in China, it’s certainly in a position to do so.

South of the border

Newzoo projects Latin America to grow 11.1% year-over-year to $5.6 billion, and it’s now the fast-growing market in the world, with a compound annual growth rate of 10.4% (for the years 2018-2022, Newzoo reported). “Growth will mostly come from mobile gaming. There is an active PC player community in the region already, but we have little reason to assume that the community will experience much growth in the coming years,” Wijman said.

Part of this is coming from better infrastructure in Latin America. But people there, just like everywhere else in the world, love games. And the Latin American developer scene is coming together in recent years.

The world in your pocket 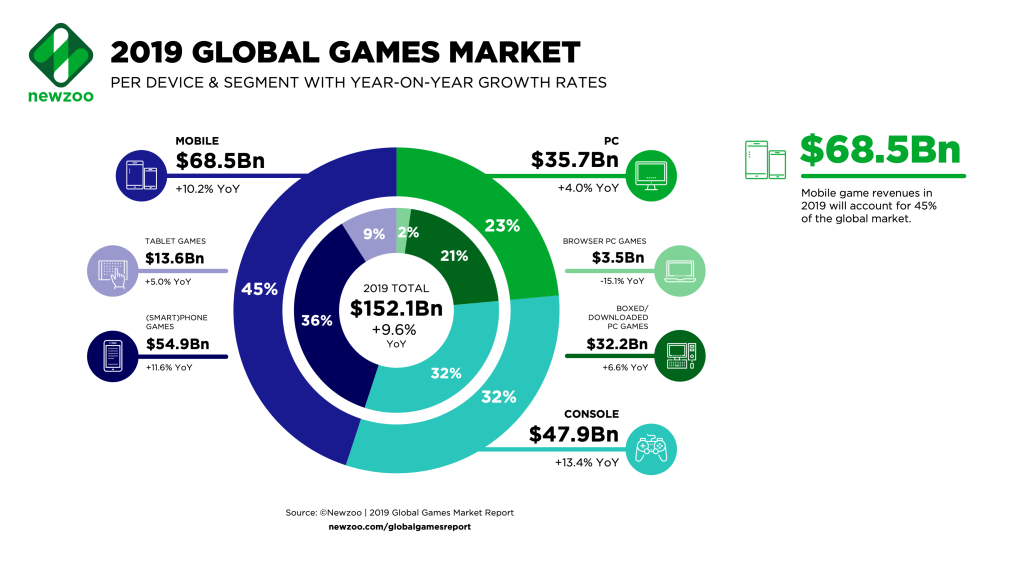 Despite the strength of console gaming in the U.S., mobile gaming remains the biggest market in the world — forecast to bring in $68.5 billion in 2019. That’s an incredible 45% of the global market. And 80% of that $68.5 billion comes from smartphone games

Newzoo also forecasts that mobile will continue to grow, widening its share over PC in the coming years, but console’s share will remain static — with new systems coming out, coupled with the strength of Nintendo, this segment is primed to hold its own against mobile.

But a hurdle looms — regulation. In the U.S., Congress is considering action against loot boxes, which many mobile games use as part of their monetization schemes. Other nations, such as The Netherlands, have already banned loot boxes because they’re too much like gambling.

“PC gaming is the bedrock of innovation in the gaming industry, but is by comparison far more difficult to get into than consoles and mobile gaming. Mobiles are ubiquitous nowadays and top-of-the-line consoles are still far cheaper than proper gaming PCs. New players, especially younger generations, are not as exposed to PC gaming. Live services have also been the norm for the most popular PC games for many years now — League [of Legends], Dota 2, [Counter-Strike: Global Offensive], etc. The esports scenes for those games is also what keeps PC growing, as PC gaming still provides the best experiences for those competitive games.

Newzoo points out that nostalgia is a big selling point in 2019. But this goes beyond the strong sales we see in long-lived franchises such as Mario and Pokémon. Publishers are finding that not only are rereleases doing well but full remakes are hot sellers as well.

“New games in the franchise have always sold well, that’s certainly true. However, what we see now, more than in the past, is not new games in a franchise but rereleases or even full remakes of the same games that drove that popularity in the first place,” Wijman said. “Not only that, but also breathing new life into franchises that were not prominent anymore, such as Spyro and Crash Bandicoot. With the mini-consoles we even see nostalgia for old hardware, though even that is because most of these games are hard to find and play, legally, nowadays.”

And we’ll likely see this success from blistering sales for Final Fantasy VII Remake and Warcraft III. Newzoo also suggests that remaking older games can reignite interest in the franchise as a whole, sparking sales and engagement for other entries in the ol’ back catalog. And it helps gets younger audiences into these old, established brands — as I’ve seen first-hand with my children, who already love Final Fantasy after seeing the remasters on Sony and Nintendo platforms.

But don’t expect the Capcom and Sega mini-consoles to sell as well as Nintendo’s NES and SNES Classic boxes did. Wijman doesn’t see them doing as well, but he doesn’t see them being a flop, either.

“[There won’t be] a flop, but likely for a niche audience. The NES and SNES mini had the benefit of being among the first mini-consoles and having franchises like Mario on there. Sega’s franchises — while popular — do not have as big an audience [as Nintendo’s],” Wijman said. “The same applies for Capcom’s upcoming home arcade system.”

As a trend, Newzoo is hot on cloud gaming. The tech behind it is better established than when the likes of OnLive began making waves a decade ago. But those waves crashed because of the cost of broadband and infrastructure. With offerings like Microsoft Azure, Amazon Cloud Services, and Google Cloud, servers aren’t the problem. It’s the cost and accessibility of broadband that’s the biggest hurdle for the likes of Google Stadia and Project xCloud. The rollout of 5G will help, but especially in the U.S, providers such as Comcast are a problem thanks to their data caps and high prices. It’s a concern.

“Definitely in the U.S., if not addressed properly. We expect that Google at least will get to some kind of agreement with major ISPs, perhaps having a separate cap for cloud gaming or more lenient data caps for those that subscribe to Stadia,” Wijman said.

Google also runs Fiber, its broadband service, but that’s in few areas, and it doesn’t look like it’s expanding it any time soon.