Peter Warman, a game industry analyst and CEO of Dutch market researcher Newzoo, started following esports closely in 2013. He started looking into the numbers and comparisons to real world traditional sports, and began making projections about where it was going.

Now esports has begun to explode, and Newzoo estimates it will generate $1.7 billion in revenues by 2021. And big “non-endemic brands,” or those that are not directly related to games or esports, are coming in as sponsors. Riot Games recently announced that Mastercard has signed on as a global sponsor for the League of Legends World Championships. Overall, esports could represent an $80 billion opportunity, based on comparisons to traditional sports.

Warman spoke at the Esports BAR Miami event, and I interviewed him there. He said that the arrival of the big brands is at hand after prolonged periods of investigation of the esports audience, which is expected to grow from 395 million in 2018 to 580 million by 2021. Already, about 11 percent of the total viewing hours on Twitch and YouTube Gaming are based on esports. That’s a big audience, but most esports teams aren’t necessarily profitable yet. So Warman warns that setbacks can still happen.

But over time, Warman is excited about the notion that many more people could someday get paid to play games. (something that we call the Leisure Economy). 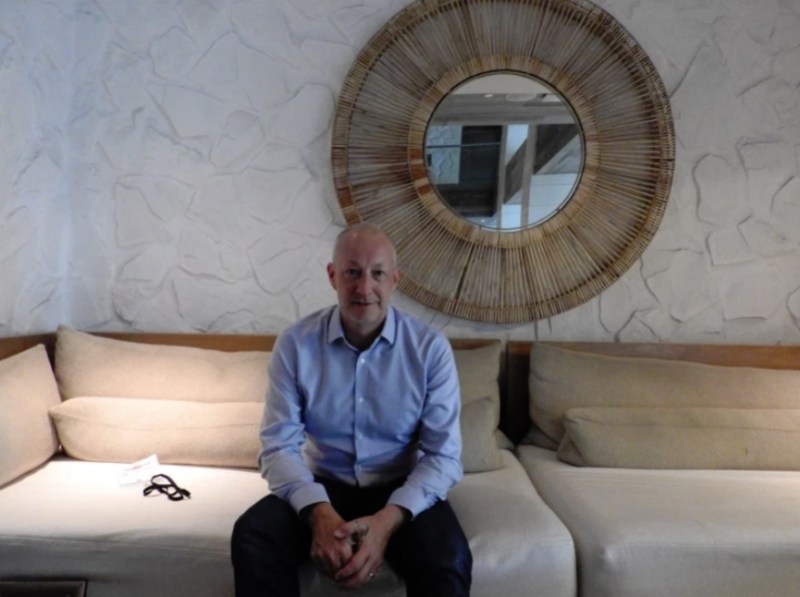 Above: Peter Warman is CEO of Newzoo.

GamesBeat: You dove into esports quite early, right?

Peter Warman: Yeah, 2013. It was right at the launch of PS4 and Xbox One. That’s when I published the first report.

GamesBeat: What made you want to get into it back then?

Warman: At that moment, on the PC side, there was so much happening. League of Legends was on the rise. The first stadium event had happened. Personally, I’m always thinking about what’s next. I was triggered by meeting Ralf Reichert of ESL for the first time, that discussion. Gamescom, for the first time, had an esports part. If you put everything together — the events, the streaming — that’s big. And there was so much innovation happening on the PC front.

Of course, I was taking all these press calls at the time, and all anyone wanted to talk about was Xbox One and PS4. I found that so boring compared to what was happening on the PC. So we boldly called this report “PC Gaming: Power to the People,” and we launched it in the same month as the two consoles. It had quotes from Valve, from Twitch.

We thought this was really consumer-driven, because streaming was at the heart of it. It wasn’t a tech-driven innovation. This was something that the fans were doing themselves. That’s how you recognize a trend that’s going to stick around. Compare it to VR around the same time, which was a little bit too tech-driven. We’ve never published anything on VR, not yet.

We spent nine months trying to model the space. You might wonder what there was to model, but at that point there was a lot to model. What to do with streaming? What do you call these people? Are they all fans? Viewers? Esports enthusiasts? How does the money flow? We started to sketch it out. You can’t forecast a market if you don’t build a structure where you can get data to fill it in and form an opinion. It was quite a process.

GamesBeat: There’s a lot of esports believers who track back to a moment in time, where they “got it,” where they felt compelled to learn more about esports. They went to a tournament and saw how exciting it was, something like that. It’s associated with things you need to believe in first, I guess.

Warman: In the very early days, we had a lot of hardware companies, like Plantronics, as clients. They were talking about this esports thing. I did a session for Plantronics with Ralf Reichert, who I didn’t know at the time, in 2013. We’re both smokers, so we got to know each other a bit over the day, and we had a drink together. Ralf has this enormous legacy in esports. I spent about 48 hours with him, and then I really got it. I could understand what streaming was, why stadium events are important, why mass press is important, why the PC was the driving platform. Everything pulled together. It was spending time with Ralf, for me. 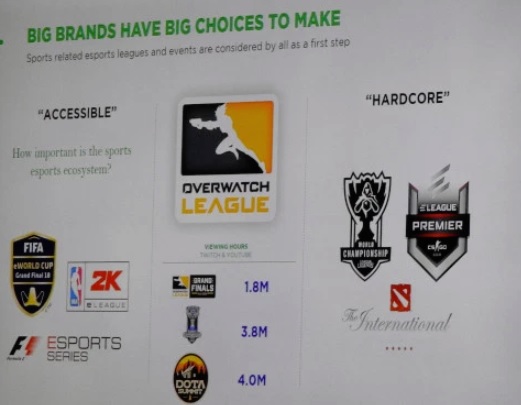 Above: Big brands are coming to esports.

GamesBeat: The time we’re in now–you had that comment about how brands are ready to jump in. Mastercard just signed on with Riot. And yet everyone believes there’s a lot more to come. We’re hitting a tipping point between preparing to get involved, and then the brands deciding what they’ll sponsor.

Warman: Exactly. Within Newzoo we group those brands in three tiers. The top-tier brands are the key sponsors of the NBA, the Champions League, things like that — Nike, Adidas, Mastercard, Visa, Heineken. Then the second tier is what we call the challenger brands, just below that. And then the third tier is innovative brands. They all take a different approach to esports.

The third tier, some of them we’ve seen really embrace esports as a means of growing their brand. From the endemic side, HyperX has completely built on esports, going from Kingston to HyperX. The second-tier brands, they have more to gain toward the top-tier brands. They’re early and experimenting and investing in esports. But the top-tier brands, they have more to lose than to gain. They’re afraid that their brand will be negatively influenced by a move that’s not respected. They’re very careful, and not always rightfully so. They’re also a bit arrogant, of course.

The third-tier brands might take half a year to decide what they’re going to do. The second tier, maybe nine months. And then the top tier, at least a year. We know, from the moment they start inquiring with us, when they buy their first report–we can guess, approximately, when the big announcement is coming. That’s a theory we’re testing internally, anyway. But the different tiers each have a different dynamic and time span.

GamesBeat: Once we go through that process, is that the point where you think that esports organizations in general become profitable? Or is there still a lot more to go to make that assumption?

Warman: That’s an interesting point. We continue to publish figures and forecasts, and then half of the audience says we’re overinflating the potential in the market, and the other half says we’re underestimating what’s going on. We’re very aware of the effect that those numbers can have. The end potential is billions of dollars. I think everyone agrees on that. It’s just a question of the pace of getting there, and whether we’ll stumble on the way.

There’s still a chance that the first investments, the financial investments and brand investments–the ecosystem may not be professional enough to handle that and give back a good return in the way they want to see. It could be that there will be a devaluation. “Maybe esports isn’t all it’s cracked up to be. Let’s give it a couple of years to mature.” There might be a slowdown. That’s a risk.

That will cause real trouble for the people who’ve built the ecosystem, because the teams aren’t profitable yet. The money going around is all investments and media rights deals. Not that much is trickling down to the teams, while the teams increasingly have to pay more salary. They’re having a hard time being profitable. The coming year or two will be critical for the health of the teams. That’s the most important thing.