Nexar, the smart dashcam recording app that leans on artificial intelligence (A.I.) to analyze road conditions and warn of hazardous events, has finally arrived on Android.

Founded out of Israel, Nexar launched initially for iPhone users in February this year. The feature-rich app goes beyond the myriad alternative dashcam recording apps out there and is striving to create a network of crowdsourced data garnered from millions of smartphones glued to windshields around the world. The app uses machine learning and computer vision technology to “interpret” the direction, speed, and acceleration of every car it sees on the roads, as it looks to understand and predict potential mishaps. 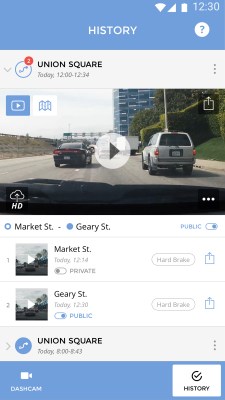 Not only does Nexar record road conditions such as accident blackspots, it can also track specific dangerous drivers by “remembering” their license plate and ranking them — you may receive warnings on your phone if the driver that has just pulled out in front of you has a track record of braking too hard. The app records everything and saves it to Nexar’s servers, while automatically deleting the video from your phone if it’s consuming too much of the available storage space.

Nexar’s aspirations follow what Waze has been doing in the navigation space, and the more data Nexar collects the smarter it should become. In fact, earlier this year, Nexar became one of the first companies to tap Waze’s transport SDK, bringing the Google-owned company’s crowdsourced navigation data directly into its dashcam app. And making Nexar available on Android should go some way toward helping it collect significantly more data.

“The Android beta launch signifies the opening of Nexar to new communities of drivers seeking an immediate solution to safer driving,” said Dan Peguine, VP of growth at Nexar.

There are actually two notable differences with the Android version of the app. First, it has dual-camera mode, meaning that drivers can record inside and outside the vehicle simultaneously — using the front- and rear-facing cameras — on iOS it’s only possible to record through one at a time. This should help encourage uptake with professional drivers, such as those who work with Uber or Lyft, as they can track what’s happening on the roads while also recording passengers to help settle disputes at a later point.

Nexar confirmed to VentureBeat that professional drivers represent a significant market for the company, and they “serve as the backbone of the vehicle-to-vehicle network” that Nexar is creating.

The second notable difference is that on Android, Nexar can be used in the background, meaning users can switch to whatever other apps they like, and Nexar will still record. This will be important to those who prefer to use other navigation apps, such as Google Maps, in the foreground.

The company, which has hubs in Tel Aviv and San Francisco, received a $4 million Series A investment in May last year, which was followed by a $10.5 million round just a couple of months back. In terms of how it plans to make money, Nexar has a number of options at its disposal, one of which includes “bringing insurance companies and fleets to the 21st century,” a spokesperson told VentureBeat earlier this year. “We streamline insurance companies’ claims process with a unique accident reconstruction. We allow insurance companies to personalize their offerings and provide discounts to safe drivers.”

Part of this includes being able to recreate accidents in 3D, using a combination of a phone’s in-built sensors and the footage it captures.

Ultimately, Nexar has a large target market, which is why it could become one of the must-have apps. Anyone who drives a car — from Sunday-afternoon cruisers to 24/7 Uber drivers — could find a use for this, and the more uptake it gets, the better it should become as a safety tool for motorists.

“In the first six months of 2016, there’s been a nine percent increase of motor vehicle fatalities in the U.S.,” said Nexar CEO Eran Shir, “and this is a global trend. “Already today, drivers who use Nexar are able to get evidence and protect themselves in case of a crash. Furthermore, when drivers use Nexar, they join a network with other drivers. The network crowdsources real-time hazards on the road and eventually, as the network grows, it will warn drivers in real time of potentially dangerous situations.”

Nexar says that drivers have notched up more than eight million miles in its app since its launch on iOS six months ago, with more than half-a-million “dangerous driving” incidents clocked and more than one hundred crashes documented.