The Internet long ago shed its ethereal status as a meeting ground for researchers and scientists, but that doesn’t mean it has lost its utility for those groups. New technologies, now mainly aimed at general consumer applications, are also being turned to more specialized purposes.

Semantic search is a good example. With its ability to connect data in a machine-readable way, it’s perfect for easing research, and has often been pointed to as part of the future of pharmaceutical research. Now a startup called NextBio is claiming that it’s already in a position to revolutionize the life sciences, following a recent expansion of its search technology.

Several existing life sciences search engines can dig through research reports, and that’s part of what NextBio does, hunting through the written text about experiments much as the search engines most people are familiar with do. But there’s a deeper world of information underneath, far more than could ever be written, about the trillions of specific genes, cells, chemical compounds and so forth that make up the living world.

In many cases this data is locked away into massive tables like this one, which take specialized skills to hunt through or even understand. While much of this data is in the public domain (pharmaceutical companies have their own private data), just looking at it won’t do you much good. Even researchers often turn to specialists for their queries on the tested effects of, say, a specific cancer gene. The search can take days, weeks, even months.

That data is what gives NextBio its specialty. They’ve built an engine that can crawl through billions of data points looking for specific qualities and similarities — in essence, automating what was a lengthy manual search in the past.

Although the scale and purpose is different, you can think of it somewhat like introduction of the Dewey Decimal System — the engine provides a newer, faster way to find what you’re looking for in a large mass of information. However, there’s yet another level to the work NextBio does: Forming connections between data where none previously existed before.

Because the data that NextBio is looking at is structured and tagged, correlations can appear between very different pieces of research. For example, an experiment involving fruit flies could turn up a gene that affects its life span, that’s similar to a human gene turned up in another experiment. Normally the correlation would never be noticed — being from almost entirely different fields of study — but a NextBio search can easily point out such similarities.

Similar data could show up for diseases, chemical interactions, nearly anything researchers look at, says CEO Saeid Akhtari. And having those connections instantly pointed out to them could help researchers skip steps that could take years of frustrating work before. “You get an idea, you spend a year studying it, go through clinical drugs, then you find out it’s toxic. Our idea is to help researchers understand what they’re into in a much shorter time span,” says Akhtari.

The idea of mining into the hidden data behind research isn’t novel, as I suggested at the beginning. Compendia Bioscience, which mines cancer genomic data, is also working on uncovering new connections, while the big pharma companies often have their own in-house tools under development.

The total audience for this kind of search is probably a couple million people worldwide, so for its revenue NextBio takes on paid enterprise clients like universities and pharmaceutical companies, searching through their private data alongside the publicly available bits. The company is already profitable, although it has also taken about $8.1 million in venture funding. 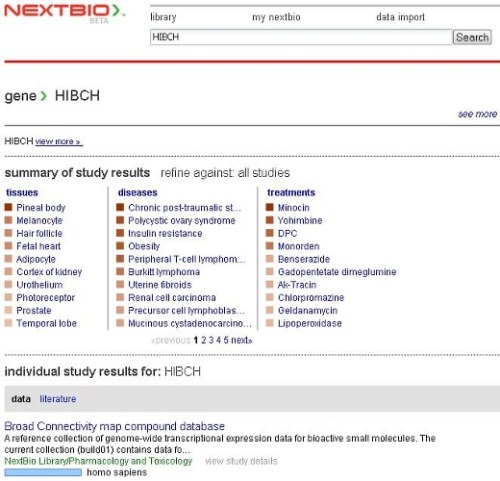