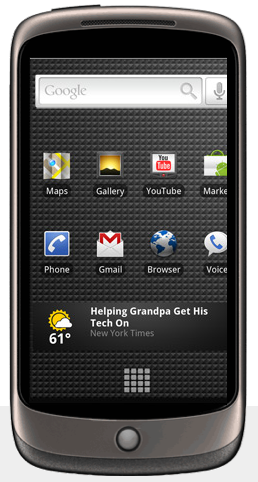 I’m at the Googleplex, live-blogging the search giant’s launch of a new Android-based phone, the Nexus One.

Mario Queiroz, VP of Product Management, is on-stage. He outlines the history of Android and the Open Handset Alliance. There are 13 new members today, including China Telecom, OEC and Freescale.

He says a year ago, there was 1 device with 1 carrier in 1 country using Android. Now there are 20 devices with 59 carriers in 48 countries, supporting 19 languages. There have been four major software releases in Android.

During 2009, Google has seen mobile searches surge by five times. In particular, Android users search the web about 30 times more than they do on a feature phone.

He also goes over some of Android’s core principles — being open-source and working, focusing on lower manufacturing costs and reducing the time to market. He also stresses that Android’s architecture supports “always on” applications that can run in the background.

The next step for Android

“We’re really only in the early stages of a longer journey,” he says. He points to some of the phones produced by partners, such as Motorola’s Droid and the Acer A1.

He says the model continues to be selectively applying engineering teams to work on products with partners.

But… And here’s the big BUT!

“What if we worked even more closely with partners to bring devices to market to help us showcase very quickly, the great software we’re working on here at Google.”

“Today we’re announcing the Nexus One.”

He hails it as “A convergence!” It’s “where the web meets phone!” It’s “an exemplar of what’s possible on phones through Android.”

He calls it a “Super-phone.”

He invites the CEO of phone manufacturer HTC, Peter Chou, on-stage to talk about features and specifications. Chou says the Nexus One is HTC’s 7th Android phone.

“The Nexus One is one of the best-designed phones in terms of its industrial design and aesthetics. It has a beautiful, gorgeous 3.7 inch display. 1 Ghz processor has the strongest processing power for bringing Android 2.1’s 3D graphics experience alive.”

Now Erick Tseng, a senior product manager, is going into more hardware and software details. He points out Qualcomm’s 1 Ghz Snapdragon processor, helpful for running applications in parallel, and the trackball, which will pulse if you get new e-mail or text messages. There’s also a light and proximity sensor on the device, that allows you adjust for bright or dim light settings. It’s thinner than a pencil, he says. And lighter than a Swiss army knife. There’s also a 5 megapixel camera with an LED flash.

There is active noise cancellation as well. There are two microphones — one on the bottom and another on the back. This allows you to blot out background noise for better call quality.

And now the Nexus One’s software

The Nexus One runs on Android 2.1, the “Eclair” version that launched with Motorola’s Droid. It allows you to sync all Facebook contacts into your address book.

There are a few new tweaks. They added more homescreen panels for a total of five. He points out the weather widget — it knows where you are based on GPS. It also gives you the temperature and humidity minute-by-minute throughout the day.

He points out the live wallpaper. It’s interactive and dynamic. If you tap on a background that features water, for example, the water will ripple on your phone. The wallpaper can also act like an equalizer when you play music tracks and ripple to the beat of the song.

Tseng transitions to talking about navigation through the phone. There’s a scroll wheel that slides up and down vertically showing you different apps.

Google shows off its photo- and video-viewing galleries, which were designed in partnership with Cooliris. It also interacts with the accelerometer and changes dimensions depending on how you tilt the phone.

He points out one last area of innovation on the Nexus One — voice search and commands. Earlier this year, Google launched voice search, which lets you speak queries instead of typing them. Then it unveiled voice commands later in the year — letting you ask the phone for driving directions or maps.

What’s new with the Nexus One is that you can dictate your e-mails, tweets and Facebook posts.

Now he says he has a special surprise — Google Earth for Android. You can spin the earth and zoom into your own location. An integration with voice lets you “fly” to different places in Google Earth.

Back to Google VP Mario Queiroz. He says the company’s trying to change the way consumers buy phones. They can buy it online, and have a choice of plans and operators. Initially, it will be with T-Mobile USA. But others like Verizon will join soon. The price point is $529. With T-Mobile it will be $179.

It will also be shipping in three test markets — the U.K., Singapore and Hong Kong.

Queiroz is stressing Google’s innovative way of selling the phone, through a Web site and allowing consumers to choose their operator. It’s the first phone in a series. There will be more operators, countries and devices later.

Q) Which company handles the inventory? A) Google is the merchant of record. Regarding the marketing, the marketing is initially essentially online. We work with clients all over the world to offer really effective advertising solutions.

Q) Reporter asks why it’s necessary for Google to design the phone. A) Google says it’s inaccurate to say that it designed the phone. It’s Peter [Chou, from HTC]’s work. Google says it handled the software.

Q) Question about the sales strategy. A) Google again says it wanted to emphasize consumer choice. “This is the early stages of a longer journey.”

Q) Reporter mentions Google is great at many things, but not retail. How is it going to get into this business? A) This is about an ecosystem of partnerships. It’s about working closely with our handset maker partners and getting products out quickly to consumers. The retailing of it is very important. It’s another channel. It’s not intended to be a channel that replaces others.

Q) What are the revenue opportunities here? Is this an ad game? Or the app sales? A) Our primary business is advertising. When we think about new ways for people to access the Internet, the mobile phone is looking more like your laptop 4 to 5 years ago. With that comes our normal business of advertising. This is the next front of our normal core business. There is some opportunity to make some margin on unit sales.

Q) Will the Nexus One, as the best-designed Android phone yet, run all the other ones out of the market. A) HTC’s CEO says people have different preferences for different kinds of form factors.

Q) Is this a signal that Google can retail. A) We’re not going to comment more specifically on this point.

Q) What about selling the other Android phones on this web site? A) The bar is raising from the MyTouch, to the Droid and up and up. So you’ll see other products coming out. We’ll be very careful about what products we want to put through this program. Today’s Superphone is tomorrow’s smartphone. Queiroz adds that they want to keep the purchasing process simple.

Q) With newer and nicer phones continuously coming out every month, how do consumers decide what to buy? A) It’s a hard question to answer. We want to make sure we’re innovating as much as possible on the devices launched through this model.

Q) Google says they’d never do me-too products. This doesn’t seem like a huge, revolutionary step. Why are you putting all the weight behind this? The pricing structure: it seems boring and like every other one out there. Eric Schmidt said they’ll have an ad-supported phone. Why are we getting these pricing structures? I want the revolutions. Where are they? A) Before you can revolutionize the world, you have to have a mechanism by which you’re selling a product. The first baby step here is, let’s get an online store here.

Q) What about giving people a physical hands-on experience in stores? A) We wanted to remain pure and simple initially. We’re selling online only.

Q) Is Google alienating its partners with direct sales. What about projections? A) I think we just see this as another way of getting to consumers and allowing them to buy devices. I don’t see it as a threat. I think this is potentially an expansion of the marketplace. Like how online stores revolutionized digital camera sales, we think online sales of phones will work the same way. As far as efficiencies go, when you test a pretty wide net and do these television advertising campaigns, it’s expensive and that has to get funded somehow. That ends up in increased device prices. We think we can connect to consumers at lower cost, and over time we can drive those prices down.