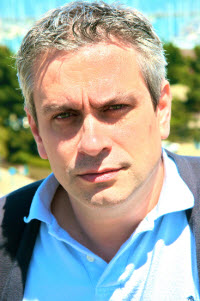 Neil Young, chief executive of iPhone game maker Ngmoco, said in an interview today that he agreed to sell his company to Japan’s DeNA for $400 million because of a shared vision to build the world’s top social mobile gaming company. DeNA announced the acquisition earlier today.

“We looked at how we wanted to build the biggest mobile games company in the world,” Young said in an interview with VentureBeat today. “We started the company with the goal of being disruptive. We wanted to be as impactful in the next 20 years as Electronic Arts was in the past 20 years.”

Young is a former executive at EA. He started Ngmoco in 2008 with funding from Kleiner Perkins Caufield & Byers, where partner Bing Gordon, former chief creative officer of EA, worked closely with Young on strategy. Kleiner Perkins itself bet heavily on the Apple iPhone by setting up the iFund, headed by Matt Murphy, to invest in iPhone-related ventures.

“Neil bet his whole career on the iPhone at a time when everyone else thought he was crazy,” Gordon said in an interview today. “People also thought that Kleiner was crazy. This deal represents investor validation.”

Ngmoco remained laser focused on the iPhone even as players such as Zynga raced ahead with lucrative social games on Facebook. Gordon, who also sits on the board of Zynga, laughed when I mentioned that Japan’s DeNA and Zynga would be on a collision course in social gaming, and that he would be right in the middle. Gordon noted that the evolution of the markets will be interesting, but he noted that market analysts have said the mobile may eventually be the biggest market of all for games.

Young said that Ngmoco wanted to emulate DeNA’s success in Japan and referred to itself in internal plans as “the Western DeNA,” even before merger talks began. Young said he met Tomoko Namba, chief executive of DeNA, 18 months ago. They started talking at first about an investment or commercial partnership and eventually started talking about an acquisition.

Young said that Namba had spent years building DeNA into a mature mobile social game company. She saw that Ngmoco’s own internal data showed it was on the same course and was living up to its promise. In the past year, iPhone game revenues started to materialize in a big way. (Ngmoco does not disclose revenues, but Young said that revenues have doubled every quarter for the past four quarters.) Ngmoco was making money from downloads, in-apps sales, and advertising as well.

“It doesn’t take a rocket scientist to see the growth of the platforms and how they are moving from the phones to tablets and TVs,” Young said.

Young said that Ngmoco will work with DeNA to build an Open Mobage software development kit to add social features to games made by mobile developers. That will create a rival platform to Aurora Feint’s OpenFeint, a social mobile game platform company. It’s worth noting that DeNA owns 20 percent of Aurora Feint. Peter Relan, chairman of Aurora Feint, said that OpenFeint is strong and has more than 3,000 games using it now.

Young also confirmed that Google Ventures invested in Ngmoco. The deal itself was never announced, though rumors surfaced. He said that the Google deal emerged as Ngmoco decided to support the Android platform.

Ngmoco has 132 employees and will likely keep expanding, Young said.