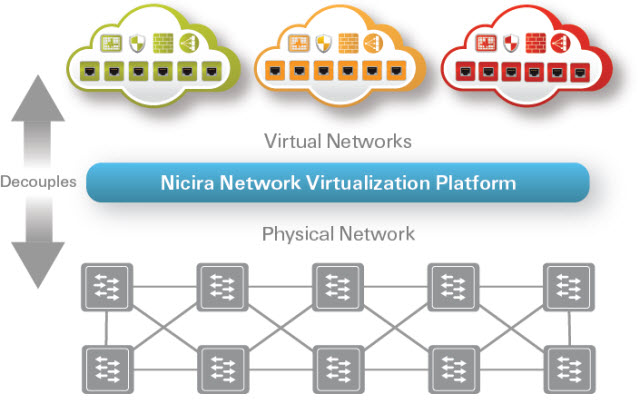 Network virtualization start-up Nicira is coming out of stealth mode today and it has an impressive set of customers who evidently believe that it can disrupt the likes of Cisco Systems and Juniper Networks. The idea is to become a company that can offload data networking demand as needed in the age of cloud computing.

If it lives up to its billing, as some of its customers say it does, it can save tens of million of dollars in spending on data centers and network infrastructure.

The customers include NTT,eBay, AT&T, Fidelity Investments and Rackspace.When those customers get hit with too much demand, their quality of service degrades and users start complaining about their inability to access data networks. Nicira offloads the network, coming to the rescue of its customers within minutes so that they don’t have to spend tens of millions of dollars building new data centers to handle the variable load.

It’s a new version of virtualization, but one for the whole network. With virtualizaiton software like VMware, a single computer can use translation software to behave as if it were dozens of different computers at once. Each “virtual machine” is a compartment within the computer that serves a particular user. But since that user isn’t using the computer, the computer can be rededicated to serve other users. It’s a more efficient way to use computers and serve users. The virtual machines can be created as needed to serve the demands of users within minutes.

Nicira’s network virtualization works in the same way, but serving the owners of huge networks instead. Service providers like AT&T often have to add new network capacity when they are overloaded. Nicira steps in as a kind of middleman, providing the network capacity as needed in an on-demand fashion. This gives networks a lot more flexibility.

You would think that big companies such as AT&T, which helps other companies handle data traffic overflow problems, would have built their networks in a way that provides such flexibility. But apparently not. So Nicira is providing the network virtualization and says this kind of advance is a huge one.

Stephen Mullaney, chief executive of Nicira, says that the virtual network decouples the physical network hardware, so that the different parts of the network can be reprogrammed on the fly to behave as needed. It can do something like cobble together two different networks to behave as one.

With Nicira to help the network handle extra load, customers don’t have to go running to the likes of Cisco, Juniper and Hewlett-Packard to get faster and faster servers and networking hardware. Nicira calls its technology a “Network Virtualization Platform.” It says it can help its customers avoid service disruptions that have become all to common.

“Network virtualization is the biggest change to networking in 25 years,” said Mullaney said. “NVP provides the final pivotal piece to cloud computing, the most transformational change to IT in a generation. And the largest most forward-thinking cloud providers are laser-focused on operations and economics, the two benefits Nicira delivers.”

Nicira was founded by networking research leaders Martin Casado and Nick McKeown from Stanford University and Scott Shenker from University of California at Berkeley. With its usage-based subscription model, customers pay for what they use and pricing is adjusted accordingly. NVP software has been available since July 2011.