Does anyone just watch TV anymore?

That’s a key question in this multiscreen age. The reality of several devices pleading for audience attention led mass media company AOL to commission viewer measurement pioneer Nielsen for research of the first Video Ad Attention Index, whose findings are being published first on VentureBeat.

If you count on TV or video ads to promote your brand, you may want to brace yourself. Because the findings are not pretty:

In other words, when TV viewers multitask, it crushes everything the ads are supposed to do. 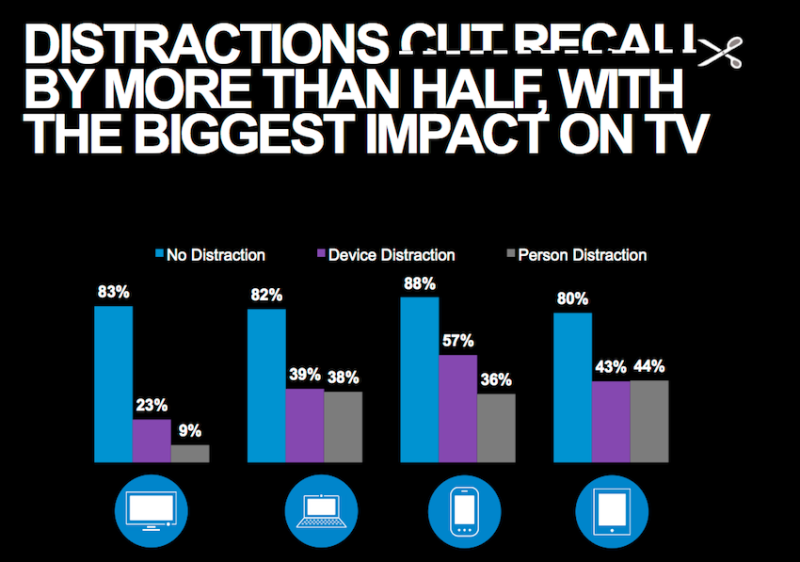 Above: The impact of distracted attention, from the AOL/Nielsen report

“The lesson for brands,” AOL director of consumer research Cortney Henseler told us, “is they need to think about things outside of reach and frequency.”

“Things like attention — what happens in a commercial’s day-to-day life,” she said.

Some reasons for this, she said, could include the fact that a smartphone or a tablet “is right there, 3 feet from your face.” Additionally, video ads on those devices are often part of short-form content — so pay attention or it will soon be over. By contrast, the bigger TV screen is literally in the background, and its sound often becomes background noise.

In fact, Henseler said, the Index’s research found that TV audio “will still trigger you back in” to watching the set, especially when it mentions relevant information. Someone thinking about getting a new car, for instance, might look up from watching a YouTube video/video ad on a tablet when a TV ad mentions a car name.

“It almost flips the idea of a TV ad,” Henseler said, where its audio in a multi-device environment becomes the key attention grabber — instead of the visuals.

With these lemons in mind, here’s the lemonade AOL/Nielsen recommends: “Brands should factor in consumer attention” when planning their campaigns.

But how do you measure attention? Surprisingly, there has not been a common metric for this key factor, even though users have been watching TV while busy with other screens since the advent of laptops.

Factoring in this new Metric, the report found that TV advertisers need 17 percent more impressions than the impressions of ads in short-form videos on handheld devices, to get the same effect. Each time an ad is seen counts as one impression.

That becomes 80 percent more impressions when you factor in fast-forwarding through recorded TV shows and skipping digital video ads. (A separate Attention Metric accounts for fast-forwarding and digital ad-skipping.)

So, if the Index’s recommendations are followed, expect many more instances of the same ad, especially on TV.

The report involved extensive research, including 14 in-home enthnographies in Chicago and Atlanta that observed at-home consumers, more than 2000 online interviews with users aged 18-64 who watch at least an hour of video weekly on some device, and 480 in-person lab interviews where participants watched videos with various degrees of distraction and then were questioned. The same ads were used in each experience.