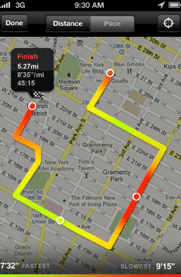 There was a time when going out for a run meant putting on some sneakers and leaving for a jog around the park. But if you need any indication of how far we’ve come, take a look at Nike’s latest Nike+ GPS app for the iPhone, released today on Apple’s App Store.

Using the iPhone’s GPS and accelerometer, the app lets you track not only your pace, distance, and calories when you go out for runs, but visually maps your run routes on Google Maps, showing you where you went and at which exact points you sprinted or slowed down.

Unlike previous Nike+ iPod offerings, no special sensors or kits are required for the app to function.

A couple of features worth mentioning are voice feedback — which lets you know how you’re doing — and the ability to tap on the map at anytime to see how far you’ve come. Additionally, some will appreciate its integration with the popular PowerSongs feature from other Nike+ apps, which lets you setup and play specific songs for different types of runs.

The app also syncs with Nikeplus.com, Nike’s online community, which has grown to over 3 million members since its debut back in 2006. Using the site, users can set challenges and track and share their progress through Facebook and Twitter.

While designed for the iPhone, users with an iPod Touch and iPad can also use it, albeit without the GPS tracking capabilities. The app is available on Apple’s App Store for $1.99.

We’ve covered a couple of similar applications before. RunKeeper launched an iPhone app that maps runners’ progress back in March of this year. And the San Francisco Country Transit Authority launched something similar for bicyclists in November 2009 called CycleTracks.