China’s console and TV games market is expected to grow from $997 million in 2019 to $2.15 billion in revenue by 2024, according to market researcher Niko Partners. The combined Chinese console game market includes gray market revenue of hardware and software alongside legal sales, Niko said. The gray market includes consoles that are designated for other markets but are actually sold and used in China, illegally.

Most consoles were gray market products in China in the past, as consoles were banned. But starting in 2014, China has slowly expanded the legal console market production for Sony PlayStation 4, Microsoft Xbox One, and lately the Nintendo Switch. While the number of legal consoles is expected to grow from 460,000 in 2019 to 975,000 in 2024, the number of gray market consoles sold is expected to decline from 1.18 million in 2018 to 1.02 million in 2024.

The total number of console gamers reached 11 million in 2019 and will reach an estimated 19.15 million in 2024. The reason the revenues will be high but sales of new consoles is so low is that there are a lot of existing console gamers who own gray market systems, but they still spend money on console games, said Niko Partners president Lisa Cosmas Hanson in an email to GamesBeat.

“Consoles need a large installed base for software and services sales to grow,” she said. “Pricing of hardware will be key, as are the features and games that each console provides. E.g. Switch popularity in China boosted by noncore games such as Ring Fit Adventure plus social titles such as Animal Crossing. China’s tough regulatory environment is currently a negative and prohibits growth of the legal market.”

The main reason for the slow growth is game approvals and the regulatory environment, but also the lack of investment in a domestic console game industry. Sony launched its China Hero Project (funding Chinese game developers) with mixed results, but now giants such as Tencent and NetEase are exploring console gaming as they aim to reach console players overseas and domestically, Cosmas Hanson said. 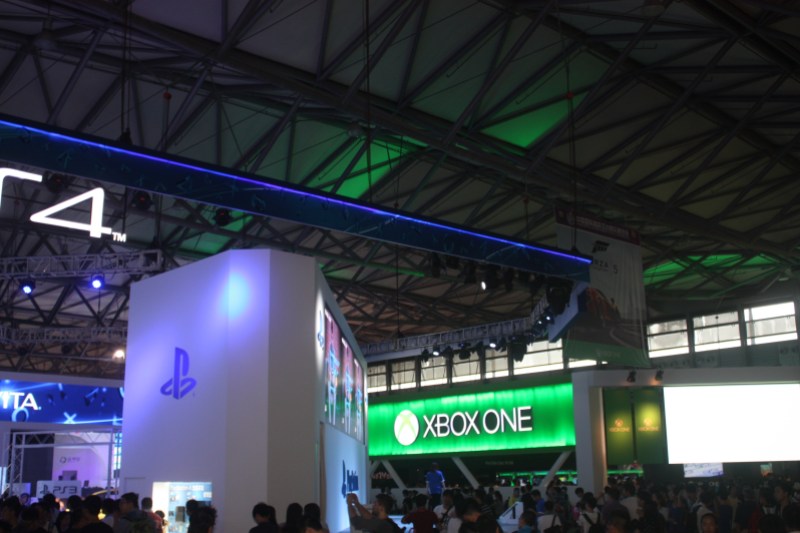 Above: Sony’s PlayStation 4 booth squared off against Microsoft’s Xbox One booth. Both are launching consoles soon in China in 2014.

The increase in spending through 2024 will be primarily driven by continued sales of Nintendo Switch, the introduction of a new console generation with Sony’s PlayStation 5 and Microsoft’s Xbox Series X, as well as increasing demand for HD games available on consoles, from both overseas and domestic publishers.

The gray market plays a large role in China due to strict regulations that have led to limited legal console games, and is set to remain the majority of revenue through 2024 as Chinese gamers import titles from overseas when they cannot buy an official version domestically.

PlayStation 4 is the current market leader, but will be surpassed by Nintendo Switch, which is selling at a faster rate. PS5 and Xbox Series X (expected to launch legally in China during 2021) will be key drivers of growth.

Cosmas Hanson said that consoles have been a niche product in China’s games market for a very long time, not only because they were once banned but also because China has a dominant free-to-play culture on PC and mobile. Cloud gaming and multi-platform development solutions will be one way for console game developers to reach more players in the country.

She said Niko recommends a cross-platform approach in China, targeting console alongside PC and mobile. Cloud gaming, which allows gamers to play console games on PC, mobile, or smart TV, is also becoming an option for console game developers to reach even more of China’s 716 million gamers.

Niko’s data is based on a survey of 2,4000 gamers conducted in March across large cities in China.

Many cities in China have already allowed PC gaming cafes to re-open since the end of March. The Ministry of Culture & Tourism also released a notice on May 12 about its guidance for internet café re-openings. Niko said that COVID-19 on China’s games market is severe, as 57% of internet café gamers do not plan to return to play games at cafés after the pandemic is over.

“However, we might be able to see people coming back to playing at PC gaming cafes en masse in Q3 of 2020 (after September 1) as it will be the time when students start their school’s new term. Hopefully the COVID-19 pandemic will be over or already having low impact by that time,” Cosmas Hanson said.