The Nintendo Switch is expected to overtake sales of Sony’s market-leading PlayStation 4 in China, according to a report from market researcher Niko Partners.

Niko forecasts that console gaming in China is expected to grow steadily to $2.15 billion in 2024. Sony is the market leader, but the Nintendo Switch is quickly closing ground, said Niko partners president Lisa Cosmas Hanson said in an email to GamesBeat.

The total number of console gamers in China hit 11 million in 2019, and that is expected to grow to 19.1 million in 2024. Even so, console software sales are still about 1% of total game software revenue in China.

Cosmas Hanson said Sony’s PlayStation brand has always been strong in China, even during the console ban from 2000 to 2014, thanks to gray market imports. Sony also focus on a more localized experience with titles from Chinese developers. The Switch is doing well thanks to the popularity of Ring Fit Adventure and Animal Crossing: New Horizons. Cosmas Hanson said gray market sales of Switch software are also strong.

As for the next-generation consoles, demand isn’t as big as it is in the West, but a discerning group of gamers wants high-quality games and sees the new consoles as an option.

“Neither of the next-generation consoles will be available in China this year (officially) but gray market imports always can be found in shops throughout the country,” Cosmas Hanson said. “Hardware and software prices continue to be barriers to the mainstream success of consoles in China. That being said, Chinese gamers are interested in playing triple-A titles that are available on consoles, and this has led to an increase in premium game sales on PC.” 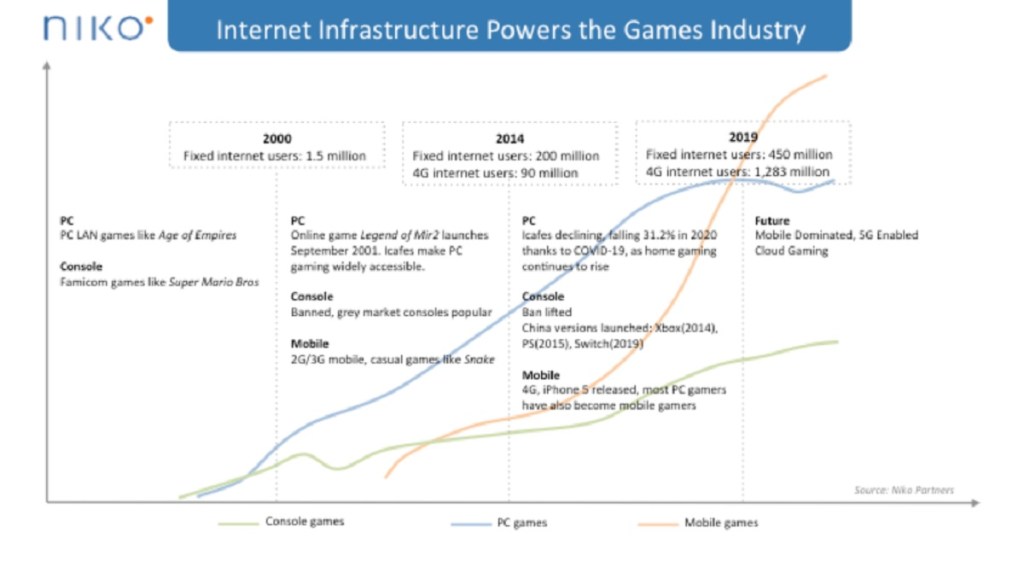 Meanwhile, mobile games have handily surpassed PC games in China in terms of both numbers of gamers and time spent playing, the report said.

Niko said that in the past five years, the percentage of gaming time spent on mobile has gone from 39.1% of time to 65.3%, while the percentage of time spent playing on the PC has shrunk from 54.2% to 27.3%. Consoles grew slightly, from 6.7% to 7.3%. This bodes well for mobile games like Call of Duty: Mobile, which is set to release in China soon.

“Most casual and web game players have already moved to smartphones from PC. Mobile games are offering more core experiences and many of them are adapted from popular PC games,” said Cosmas Hanson. “So yes, mobile is eating into PC games, but it is also bringing people back to PC games by having the same title available on both platforms.”

Meanwhile, the PC was also hurt this year by a decline in the number of people playing in internet gaming cafes due to the pandemic. Cosmas Hanson said that a survey earlier this year showed that 57% of internet café users did not plan to return to the venues after the pandemic is over. That has led to a boost in home PC hardware sales.

“Internet cafes will remain popular in China and will evolve as the business need dictates,” Cosmas Hanson said. “There will be a utilitarian purpose to internet cafes in many cities for a long while, but by and large they serve the purpose of faster, better computers and connections in a social setting among like-minded gamers.” 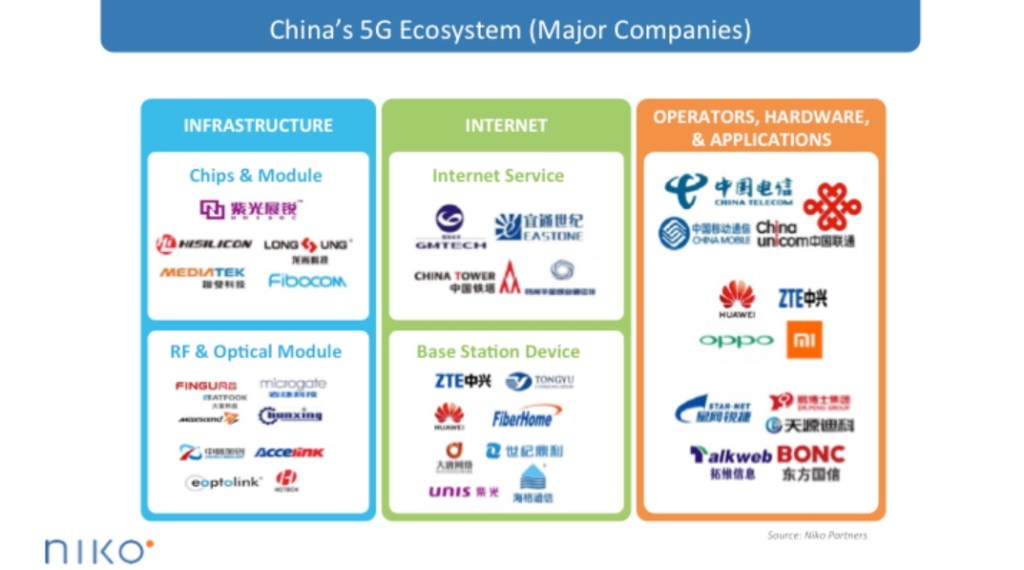 Above: Niko Partners notes the internet infrastructure behind games in China.

About 99.6% of Chinese gamers own a smartphone, 56% own a PC, and 46% own a laptop. Those PCs are better than they used to be, with many players owning high-end hardware to play games such as PlayerUnknown’s Battlegrounds (PUBG). Just 17% of Chinese gamers own a console, as consoles were banned in China for many years. The report found that 88% of gamers in China consider gaming when they purchase a new PC.

Gamers in China are tech savvy, and tend to research hardware on their own with input from friends, forums, and influencers for hardware information, rather than relying on advertising or salespeople.

More than 417 million broadband users now have fiber connection to their home or office, up 10 times from 2013.