Right now, the region has more than 527 million smartphone users, and that will grow to 679 million by 2023, Niko said.

Roughly 40% of all smartphone users play mobile games. 5G is planned to launch in most GSEA countries in 2020, which is expected to boost mobile gaming too.

Internet user penetration in Southeast Asia and Taiwan is projected to pass 99% by 2023, up from 77% in 2019, with much of this via smartphones. 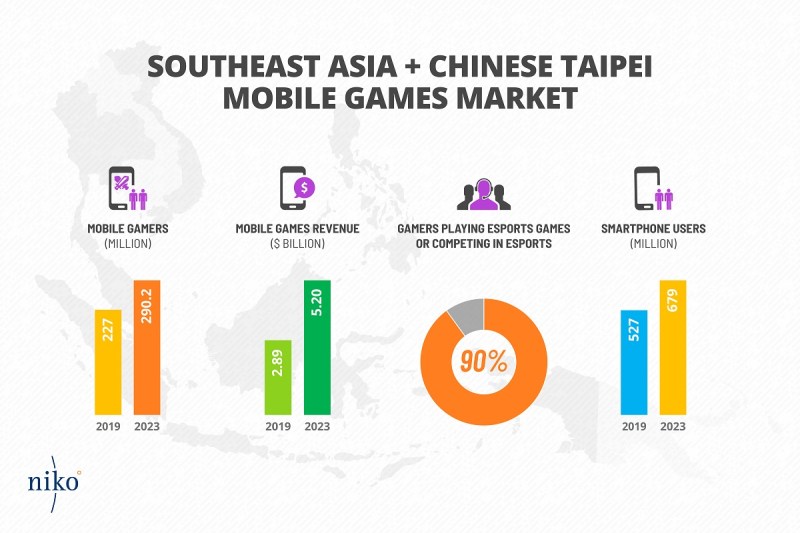 Above: Esports is hot among Southeast Asian mobile gamers.

Esports is the most important driver of growth in the games industry in Asia, with an overwhelming majority of Asia’s gamers actively playing or competing in esports games. Indeed, 95% of PC gamers in the region engage in esports, while 90% of mobile gamers play esports.

The region’s leading games company, Singapore-based Sea Corp.’s Garena business unit, scored a big hit with Free Fire. The mobile game recently surpassed $1 billion in revenue globally and is the No. 1 battle royale game, with more users than Fortnite and PUBG combined in the region.

“Not only is Southeast Asia a growing games market, it is also the heart of esports globally,” said Lisa Cosmas Hanson, managing partner of Niko Partners, in an interview with GamesBeat. “And a Southeast Asian company Garena has crossed $1 billion in revenues. It means it’s a region that should no longer be overlooked.”