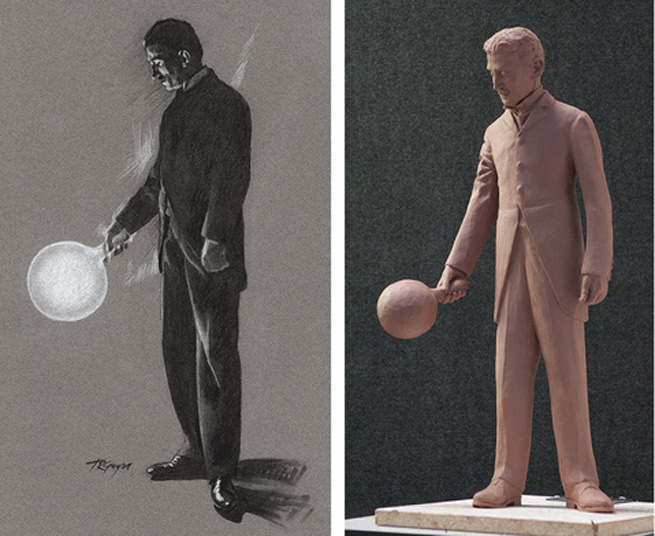 Nikola Tesla gets a lot of love these days — far more than he did when he was inventing all kinds of cool things more than a century ago.

A new Kickstarter campaign launched today wants to spread some of that love to Silicon Valley, home to many of the United States’ top entrepreneurs and inventors. Tesla is best known for his contributions to the alternating current (AC) electricity system and predicting many futuristic concepts that would later be realized.

The campaign is the brainchild of entrepreneur Dorrian Porter, who has been fascinated and inspired by Tesla for several years. Porter sold his company Mozes to ePrize back in January, so he is taking a break before moving on to his next venture. Getting this statue made has taken up a decent amount of his break.

Porter believes so deeply in the project that he has invested “thousands of dollars” to get the campaign going with the creation of a statue model, getting the video together, and other costs.

“Nikola Tesla is so relevant because he was all about choosing creativity and innovation over money,” Porter told VentureBeat. “He was a visionary.”

One of the most notable statues of Tesla resides in Niagara Falls State Park. But there is not one in Silicon Valley.

Porter has proposed that the statue be placed in Palo Alto because “it is the heart of Silicon Valley.” Specifically, he has received permission to have the statue in front of an office building located off of Page Mill Road, not far from California Avenue. He said thousands of people will see it every day.

The campaign will run for 30 days and has a goal of $123,000. Porter is a fan of Kickstarter and has backed 35 projects in the past two years, so that’s why he chose Kickstarter to raise money. Here’s how Porter breaks down the costs:

The timing of today’s Kickstarter launch is especially appropriate given that a Tesla-focused organization has just completed the purchase of his old laboratory in New York state so it can be turned into a museum.

This museum project has attracted a lot of attention thanks more than $1 million being raised online by influential webcomic The Oatmeal to support it.