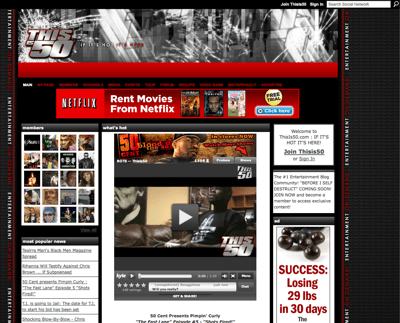 Bianchini believes the company is capturing a unique range of information about all sorts of niche networks on the site, from fans of the movie Twilight to fans of rapper 50 Cent to a wide range of smaller niches — raw food eaters, railroad industry thinkers, etc. March’s growth surge was partly due to a redesigned homepage that included a search box to help new users find networks that fit their interests.

Here’s some more data about what’s happening on the site: Around 2.6 million individual pieces of content — photos, blog posts, etc — are added every single day, for a total of half a billion unique content items created to date. The site had 2.7 billion pageviews in March. Between 3,000 and 3,500 new networks are created on the site each day, and 700,000 of the site’s 22 million total registered members have created their own network. Bianchini says that only 60 percent of Ning’s networks are counted by third-party web analytics firms, including comScore and Compete — data from those companies shows the trends rather than what the company says are its real numbers.

I asked Bianchini how Ning sees itself in relation to web-wide social data services like Facebook Connect, MySpaceID and Google Friend Connect. These services let other companies use social network information to add a wide range of social features to their own web sites. How will Ning’s social networking features not be fully commoditized, as niche social networks form around sites that use these features? And what about other services, like Twitter, which let people easily find and build microcommunities of microbloggers.

She says Facebook already owns who you know — who you went to college with, who you grew up with. Twitter owns real-time and news communications. But Ning has become the place to go for finding a social network of people who share the same interests as you, Bianchini believes. More and more ways are being created for social data to help build communities on any site, but certainly, the recent growth seems to be backing Bianchini’s point.

The company’s making money from around 12,000 social networks that pay it $55 a month for access to premium features. That sounds like a nice revenue stream, but not that big of one. What about advertising? Bianchini didn’t talk about that in detail but she did emphasize that the data users are creating on Ning is unique and valuable — so maybe the company is working on some sort of ad-targeting system that somehow uses this data? That’s just my speculation, but social networks like MySpace and Facebook have been experimenting with that concept (and let’s not forget that Ning co-founder Marc Andreessen sits on Facebook’s board).