Ninja Metrics spent a long time building Katana, its social predictive analytics engine. And now it really looks like it’s paying off, and the truth of the research is quite fascinating.

By identifying users who bring “social value” to games, the Los Angeles startup said it can identify the ad networks that deliver more of these valuable players than others. And as a result, it can make a developer’s ad spending 40 percent more efficient. Ninja Metrics may be able to eventually do something quite explosive: identify which ad networks are really the worst at delivering what they say they will. 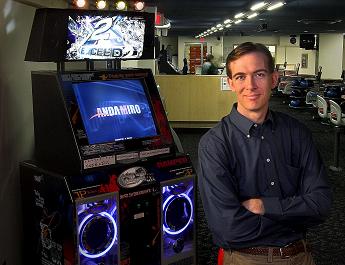 It all starts with some of the fundamental research that Ninja Metrics has done on people who are social butterflies in games. Dmitri Williams, chief executive of Ninja Metrics, said in an interview with GamesBeat that his company gives marketers the ability to assess the true ad value of a user, which is different from the immediately observable value. He’s giving a talk on the subject at the Game Developers Conference in San Francisco. The analytics work with PC, console, and mobile games and apps.

“We do the social value calculation to find out what players are truly worth,” Williams said. “Some are worth more or less than you think.”

Most analytics engines don’t identify “social whales,” or the people who cause spending in multiplayer games. Williams said that these people are like the life of the party. They get their friends to go to a bar and spend money on drinks. They may not spend much themselves, but if they weren’t around, those friends wouldn’t spend any money at the bar. In mobile and online games, these players are hidden. Most analytics engines pay attention to the payers, or whales, who spend money. They discard the social whales because they aren’t really looking for them.

But the social whales have a great deal of social value and influence. Ninja Metrics can find these people, and it has found that some ad networks have more of them than others. That means that the value of that ad network changes, based on how much social value its players have. Ninja Metrics has taken its data and studied a collection of ad networks. It isn’t yet publicly identifying the worst ones, but it will reveal the data to its paying customers, Williams said.

If developers redirect their spending to emphasize the ad networks with the social users, the return on investment increases 40 percent, he said. That results in a more accurate reflection of True Ad Value. The Katana Social Analytics Engine ties in-game social behavior and player influence back to the advertising referral source, allowing companies to track their return on investment for each advertising source.

Ninja Metrics can also apply this analysis to territories, so it has figured out which countries have the most social users and which ones have the least social users. Some countries have a lot of social users, logically, because they are poor countries where the users don’t have much money. They cause a lot of social activity and spending, but don’t have much money to spend. The richer countries have fewer of these people. Germany’s social value is 8.64 percent worse than observed, while Argentina’s is 99.63 percent better than it appears to be. This means that translation could be a very good investment in a game.

Williams said that one strategy is to mix the players together, in terms of grouping them together in the same location or server within a game. The social users will cause the players with a lot of money to spend more, and the result will be good for game revenues. Each player has a social value, like a credit, and influenceability, which is like a debit.

Research has borne this out, Williams said. One person may cause three friends to spend $243 in a month. If that player drops out, then their spending drops by $243. In an actual case, the drop was $236.

“It’s no longer a nice idea,” Williams said. “There is accurate evidence.”

“This is first direct evidence anywhere of value of people in games,” Williams said. “That is a big deal scientifically. A year ago, we thought social value mattered. Now we now it. In MMOs, identity is much stronger. You have persistence and stronger teams and better tools for dialogue and coordination. There’s a big payoff for a community manager, even though you can find it on the profit-and-loss statement.”

It all makes sense. But Ninja Metrics is more useful in figuring out who is delivering and who isn’t. One ad network, for instance, performs 2.5 percent better than was readily observed because of its hidden social value. Another was 12 percent worse than observed. The best ad network has a 193 percent improvement over observed value.

“I can’t name names publicly yet,” Williams said. “But clearly, one is over-delivering and one is under-delivering.”

There’s also huge variance based on types of creative ads. One type is 900 percent better, while another type is 70 percent worse than observed value.

“This means that creative advertising matters a ton,” Williams said. “As (former U.S. Supreme Court Justice) Louis Brandeis once said, ‘sunlight is the best disinfectant. You optimize with the truth, not smoke and magic.'”

Others might try to copy the research, but Williams said it is patented.