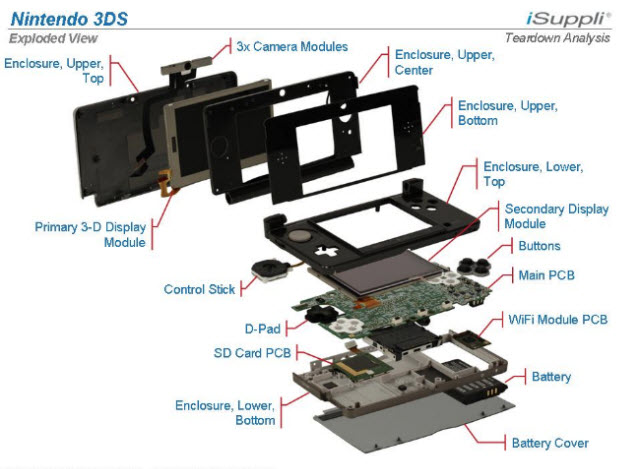 About a third of the cost of Nintendo’s new 3DS portable game player is in its two high-end displays, according to a product teardown by market analyst IHS iSuppli.

The teardown gives a window into one of the latest mobile devices, which packs a lot of new technology such as a stereoscopic 3D display into a very small space. It also shows how much effort Nintendo has put into keeping the costs low on a device and how much more technology Nintendo has packed into the device compared to its previous generation handheld.

Nintendo began selling the 3DS on Sunday in the U.S. It launched last week in Europe and earlier this month in Japan. IHS iSuppli says that its dissection of the Nintendo product shows that it costs about $103.25 to build. That’s pretty close to the estimate from UBM TechInsights, which estimated the 3DS cost $101 to make in its own product teardown.

The cost of the components, or the bill of materials, for the 3DS is $100.71. Adding in the $2.54 manufacturing cost, the total rises to $103.25. That is 33 percent higher than the $75.58 cost of materials for Nintendo’s previous handheld, the Nintendo DSi, which was introduced two years ago.

This doesn’t mean that Nintendo makes a huge margin on the hardware. The cost estimate does not include the cost of the 3DS internal software, licensing fees, marketing costs, engineering costs, and distribution costs.

Andrew Rassweiler, senior director of teardown services of IHS iSuppli, said the screen consists of a color TFT liquid crystal display in the front with a monochrome LCD in the back. That part creates a “parallax barrier” that allows the screen to display stereoscopic 3D without the need for glasses.

The 3.5-inch screen can display images with a resolution of 800 by 240 pixels and is made by Sharp. That display as well as the 3-inch secondary touchscreen cost a total of $33.80, or 34 percent of the total cost of the device. That’s $11.85 more than the cost of Nintendo’s DSi handheld displays.

Another expensive item is the applications processing chip, which at $10 costs accounts for about 10 percent of the overall total. That is also made by Sharp and most likely designed by Nintendo. The memory system costs $8.36, or 8.3 percent of the total. That’s double the cost of the DSi memory. The NAND flash memory from Samsung in the 3DS is 2 gigabytes, up from 256 megabytes in the DSi. One component that is a surprise is the multichip memory from Fujitsu. IHS iSuppli said that the component is single-sourced and so the price may not fall that much in the future.

The 3DS uses a lot of components from Japan and has some exposure to the supply chain risks posed by the disruptions from Japan’s quake and tsunami. IHS iSuppli said it can’t identify any specific problems for the 3DS components.

The user interface system, including the gyroscope from InvenSense, costs $6.81, or 71 percent more than the DSi’s user interface system. It includes an accelerometer made by STMicroelectronics. The wireless networking chip from Atheros costs $5. The dual camera subsystem costs about $4.70.

Nintendo splurged a little on the battery, which costs $3.50, compared to $1.70 for the DSi. Still, the 3DS only gets five hours of battery life.