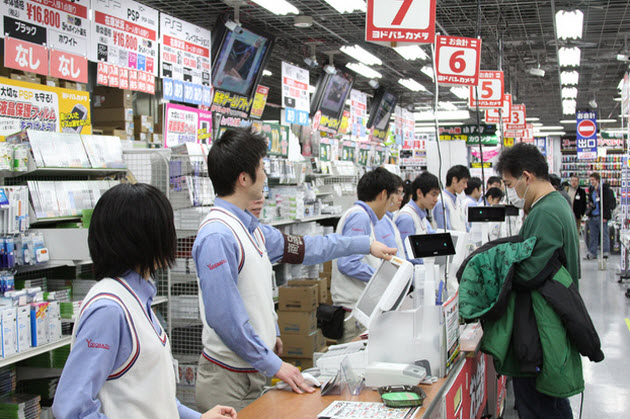 Nintendo started selling the 3DS handheld game system this weekend in Japan, and fans lined up in chilly weather to get their hands on the new handheld which can be viewed in stereoscopic 3D without special glasses.

The system won’t arrive in North America until March 27 and in Europe on March 25. Nintendo typically targets its initial launches of new game systems for the Japanese market first and then it builds larger supplies to launch worldwide. The system is a critical one for Nintendo, which wants to continue to dominate handheld gaming despite the strong sales of Apple’s iPhone, iPod Touch, and iPad — which have become spectacular game platforms. New game systems typically sell out in their first sales spurt, so we’ll be watching to see how the launch goes for Nintendo.

GameSpot said crowds lined up at one store at the Yodobashi Camera store in Tokyo’s Akihabara electronics district. But some of the people were there to get a new toy based on the Kamen Rider television show. It so happened the new toy was being released on the same day as Nintendo’s new dual-screen portable device. The 3DS is available in cosmo black or aqua blue colors, and there were eight Japanese 3dS games available at the launch. Outside the store, a number of new 3DS owners tired out the system’s Street Pass social functionality outside the store.

The 3DS costs 25,000 yen, or $300, in Japan. In the U.S., it will cost $250, with games costing $40 each. That might be a reflection of how competitive the U.S. market has become with the Apple and Android devices on the market. Nintendo has said it expects to sell 4 million DS units by the end of March, including 1.5 million in Japan. Given past history and the interest in the device, that should be easy for Nintendo to do. The DS has sold more than 145 million units in its lifetime since 2004. Sony will have its own new handheld game system, the NGP, coming this fall.

Bloomberg reported about 2,000 people lined up at a store in Akihabara, after e-commerce retailers sold out their pre-orders. Reuters said customers lined up at a camera store in Yurakucho, Tokyo. And the Wall Street Journal reported hundreds of people outside a store in Ikebukuro, Tokyo.

PC magazine reported that the 3DS system got hacked soon after the sales started. Hackers “jailbroke” the device to support flash memory cards that can play older Nintendo games.