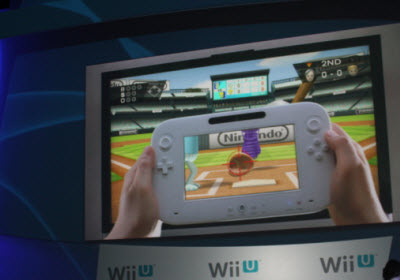 Nintendo confirmed today that it will ship a new touchscreen controller with the upcoming Wii U game console that will ship in the second half of 2012.

You can place a controller on a table and play a game like Go and not use the big-screen TV at all. You can do video chat with it while watching a TV program. You can use it while using the Wii Balance Board for the Wii Fit game. It’s a versatile new piece of hardware that could unleash the imagination of the whole video game industry. More details will come, but it’s already clear that game makers such as Electronic Arts are going to support 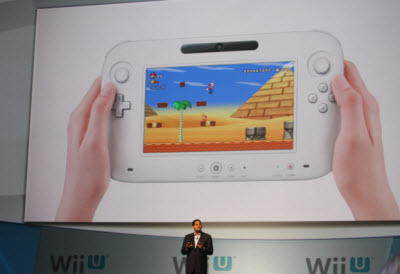 this touchscreen and console in a big way.

“It’s a new structure for entertainment,” said Satoru Iwata, president of Nintendo, speaking at the company’s press conference at the E3 trade show in Los Angeles.

Game designers can decide how they want to use the controller. It can work with the Wii U console in high-definition games on the TV. Developers can also make games that use the Wii U, the touchscreen, and older Wii peripherals as well. More details are at e3.nintendo.com. The controller has motion-sensing built into it, in addition to the touchscreen. The controller also has a number of traditional buttons.

Nintendo showed off the new controller along with videos of the high-definition graphics that the Wii U will be able to do. Reggie Fils-Aime, president of Nintendo of America, said the device will “change the face of gaming.”

The company is demonstrating a bunch of game prototypes for the Wii at its booth at the E3 show. You can have “asymmetrical game play,” where one player can play on the big screen while another looks at the touchscreen’s five-inch display.

John Riccitiello, chief executive of EA, came out on stage to say that EA would publish great new content on the Wii U and its new controller.