The more compact and lightweight Switch Lite is a dedicated handheld which doesn’t dock to display games on a television, as the Switch can. It launched worldwide in September, and sales are strong.

Furukawa showed a chart that showed the Switch Lite’s weekly sales compared to the sales of the Switch, which continues to sell well. 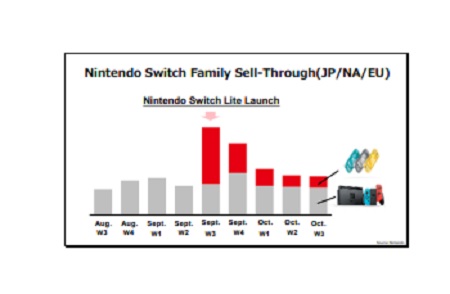 Above: Nintendo Switch Lite is building on top of growing Switch sales.

And Furukawa said that a higher percentage of women are buying the Nintendo Switch Lite.

“We think this will make the handheld Nintendo Switch Lite a familiar and enticing proposal to Pokémon fans,” Furukawa said.