Nintendo didn’t give any more details about how the Switch will work or what games will debut alongside it, but the publisher provided some goals for the system as part of its most recent quarterly financial report.

Tatsumi Kimishima, Nintendo chief executive officer, says the company plans to ship 2 million Switch consoles before the end of its fiscal year in March. It will spread those units across the United States, Europe, and Japan as part of the system’s global launch. Kimishima also explained that the company will make a profit on Switch hardware, but it also wants to ensure that the device comes out at a price that is in line with consumer expectations. The Japanese publisher reported dismal results for the first six months of its fiscal 2017, and Switch is one of the few saviors on the horizon. 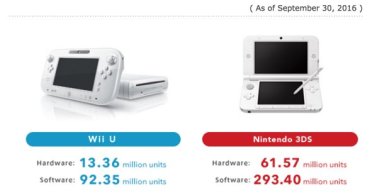 Above: Wii U and 3DS lifetime sell-in to retailers.

Switch will launch in March, and those 2 million units will have to last for four weeks at the most. To put that in perspective, Nintendo sold 3.06 Wii U million units in the six weeks between its mid-November debut at the end of 2012. 1.32 million of that was in North and South America (primarily the United States and Canada). With excitement for the Switch seemingly much higher than it was for the Wii U, it is likely that Nintendo will have difficulty meeting demand for its new system at launch. In total, Nintendo has sold 13.4 million Wii U systems.

When it comes to price, Kimishima explained that he wants to find the middle ground between profitability and competition. Nintendo is in a position where it cannot afford to lose money on hardware, but it knows that it cannot turn off consumers with a shocking sticker price.