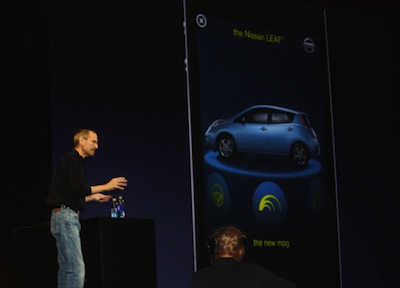 Proving this even further, Nissan’s all-electric Leaf got a major plug at Apple’s Worldwide Developers Conference today, when CEO Steve Jobs used the product to showcase the new iAd platform on the fourth-generation iPhone.

The ad in question — which will start running on the handsets on July 1 — took over the whole screen on the phone, but could be canceled with one tap. It was also very illustrative in its description of the product, showing that the Leaf will be able to travel 38 miles versus the Toyota Prius’ 17 miles on just $1 worth of gas. A lot of pictures and videos of the car were also built into the ad, including a rotating image showing viewers the entire vehicle.

Most impressive, however, was the interactive nature of the ad — one of the most attractive iAd features. The Leaf advertisement will allow viewers to join the waiting list for the car, which is set to be released before the end of the year. They can also play around with graphical elements representing the vehicle’s fuel efficiency to see how far they could go and how much money they could potentially save by buying the car.

Incidentally, AllCarsElectric ran a story at the end of last week about how the Nissan-Volt rivalry is becoming more of an Apple-Android rivalry. The article even compares to the cars’ appearance, suggesting that the Leaf is more rounded and generally cuter (much like Apple’s hardware), than the fiercer, more perfunctory-looking Volt. While the article doesn’t mention the deal GM made with Google to run its OnStar application on its Android operating system, it seems almost prescient about the Nissan-Apple alliance.

Nissan is one of a prestigious roster of iAd partners, including Citi, Unilever, Chanel, General Electric, Target, Best Buy and more. Altogether, they have already committed to $60 million in iAds.