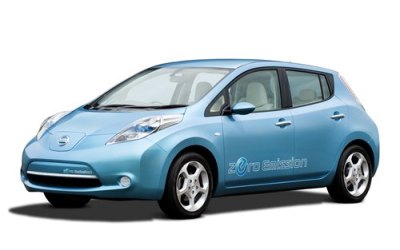 With both the Nissan Leaf and General Motors’ Chevy Volt slated to launch before the end of the year, 2010 is quickly becoming a barometer for how the market will receive plug-in vehicles — and which brand will take the lead. But now Nissan has preemptively pulled ahead, announcing today that its fully-electric Leaf will retail for $32,780 before federal tax credits — undercutting many of its competitors.

Its chief rival, the Volt, has yet to be priced. Analysts initially expected the cost to hover around $32,500 after a $7,500 federal tax credit — but recent estimates have run as high as $40,000. Another big-name competitor, Tesla Motors, will be launching its Model S electric sedan in 2012 at an expected price point of more than $40,000 after incentives. And by then, both the Nissan and the Volt may have dropped in price, depending on market adoption.

Nissan also announced that it will start taking orders for the Leaf on April 1, with the goal of selling 6,000 of them in Japan over the next year. It will go on sale in the U.S. in December, priced at $25,280 after a $7,500 tax credit — a practical sum for middle-class consumers. If the state you live in adds additional tax incentives, the price could even go below $20,000, making the Leaf the only fully-electric vehicle coming anywhere close to competing with Toyota’s hybrid Prius.

Sky-high prices have been one of the major hurdles standing between electric vehicles and the mass market. Now it looks like those barriers might be coming down, if Nissan can turn a profit on the Leaf. The challenge is that batteries for these advanced cars remain perilously expensive. The Leaf’s battery pack, for instance, accounts for about a third of the car’s sales price.

Battery costs are expected to drop as the technology becomes more refined. Nissan, General Motors, Mitsubishi, Ford and Tesla are all sprinting toward new, more affordable solutions in this area. Right now, lithium-ion batteries made for cars cost about $900 per kilowatt hour. The average electric car runs on more than 20 kilowatt-hours. This is the number that needs to drop to make electrics more feasible for all consumers. Nissan says its hit $500 per kilowatt hour, explaining why it can offer its car cheaper, as Greentech Media points out.

Nissan has also distinguished itself by pitching the idea of charging pads. Instead of juicing up batteries at charging stations like the ones made by Coulomb Technologies, or swapping out batteries at stations run by the likes of Better Place, drivers should be able to recharge their cars simply by driving onto special charging pads that could be installed in any parking lot — at least that’s Nissan’s vision. Whether it will come to fruition in two years or 10 remains to be seen.

For now, the Leaf’s price point, is a hopeful sign that there is a place for electric cars in the U.S.’s automotive consumer culture. But the company will have to keep innovating if it intends to stay ahead of the curve. There’s no way GM and Ford are going to let their technology fall behind when there’s serious market share at stake.