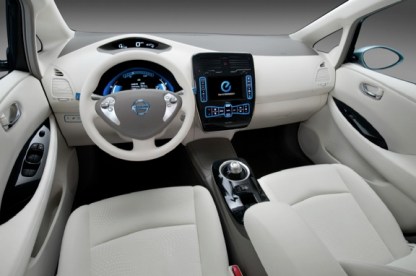 Nissan is taking orders today for the Leaf, the first mass-produced, all-electric vehicle, but it’s only offering up 200 cars for December delivery.

Those Leafs will go to five states in the initial rollout market – California, Washington, Oregon, Arizona and Tennessee — which amounts to just few orders per dealer. Fleet sales manager Ray Ishak of the CampbellNelson dealership in Seattle (pictured below), who gave VentureBeat the initial rollout numbers, said his dealership has gotten six orders so far today.

Customers who plunked down the $99 reservation fee would have gotten an email today if they were chosen to place an order, which would allow them to negotiate a price with the dealer and pick the color and trim.

According to Nissan, the ordering process is “prioritized based on when consumers submitted their original reservations online and by the consumer’s market,” which seems to be the case for CampbellNelson – they have about 30 customers who reserved in April and May (reservations started in April) who are still awaiting their invitation to order, and Ishak said he knew of five confirmed April orders that did not receive an invitation today (had those come through, they would have bumped his orders up to 11 Leafs).

Nissan hasn’t been clear to dealers on whether the cars will be divvied up equally among the five markets (40 cars each), or if a large market like California will get a bigger share. But given that there’s eight Nissan dealers in his area, Ishak says he’s “somewhat happy” with getting six orders, though he expects more to come in this week.

“I would expect that Seattle would not get more than 30 in December,” said Ishak, who has been posting details on the ordering process on the MyNissanLeaf.com forum – ahead of official Nissan announcements. In fact, his post that orders would start today set off a frenzy of blog reports on Monday, even as Nissan declined to confirm that the order books would open this morning (and they did). 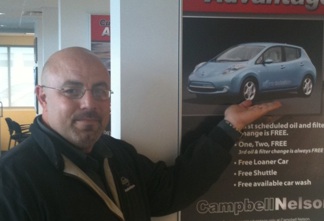 Ishak and other car dealers have been active on the forum, seizing the opportunity to get some visibility among a crowd hungry for information on the Leaf. Ishak says he also values “transparency” and sees appreciation from forum users for his informative answers to their queries about pricing, availability and options. He posts under the name “CampbellNelson,” signing each post with his full name, email address and phone numbers.

Nissan was supposed to start taking orders Friday, but pushed the date back to today – likely due to technical problems, Ishak said. The automaker has reported receiving 18,600 reservations so far, and it is on track to hit its goal of 20,000 by December.

The Leafs ordered in August should start being built in Japan in September, Ishak said. Orders that come in in September might have a slight chance of being filled in December, but most likely will hit dealer lots in January. California may get theirs first, since the cars are first shipped to Los Angeles before being sent to the rest of the Northwest.

From a dealer standpoint, Ishak said CampbellNelson had spent upwards of $100,000 to prepare itself to sell and maintain Leafs. And there are already price wars brewing, although Ishak says CampbellNelson plans to offer the car without markup (the Leaf MSRP comes with a built-in $1,300 gross profit for dealers).

A few interesting features on the SL model: it comes with a solar panel spoiler that converts sunlight into energy to “charge essentials” without draining the car battery.

One $700 option on the SL model will allow you to charge it up to 80 percent capacity in 30 minutes. It’s also recommended you buy a home docking station, which will charge up your Leaf in six hours — the standard charging kit packaged with the car will take you 20 hours to charge the car to capacity.