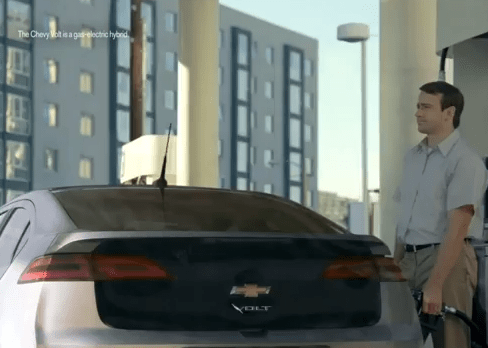 Nissan lumps the Chevy Volt, a plug-in electric hybrid that drives the first 30 or so miles off battery power before shifting to an internal combustion engine to extend the car’s range, into that group of gadgets and devices that are polluting the planet with gasoline use. The advertisement is the first major sign of a growing competition between Nissan and General Motors to attract car buyers that are interested in more fuel-efficient cars. Nissan is focusing on creating a pure electric car while General Motors wants to create a car that is more fuel-efficient but has the same range as a typical car.

Most of the concerns for electric car buyers center around how long it takes to charge the car and how far it is able to drive, according to a report by Accenture. Electric cars are typically limited in how far they will go on a charge, and they can take a long time to recharge. It can take up to 5 hours for some vehicles to charge completely from an empty battery.

The Volt has a traditional internal combustion engine and an engine powered by a battery jammed into the same vehicle. The car can run around 35 miles off battery power before the internal combustion engine kicks in, giving the car a total range north of 300 miles on a full charge and full tank of gas. It’s one of the cheaper electric cars on the market. The Nissan Leaf — another one of the cheapest electric cars — is a pure electric car that can travel around 100 miles before it needs to recharge.

Nissan’s plug-in electric car, the Leaf, outsold General Motors’ Volt electric car for the first time in April — the result of Nissan aggressively expanding its production of the Leaf to meet an almost insatiable demand for the electric car. Before April, GM’s Volt had consistently outperformed the Nissan Leaf each month. Electric car buyers bought 326 Volts the month after the car went on sale, compared to 19 Nissan Leafs sold that same month. GM sold 608 Volts in March.

The 2011 Nissan Leaf sells for $32,780 while the 2011 Chevy Volt costs around $41,000. Electric car buyers can apply for a federal tax credit that can bring the price down by $7,500. They’re both designed to attract mainstream car buyers looking for a more environmentally friendly option or a way to save money on gas. The Nissan Leaf can travel around 100 miles before needing to recharge and has an equivalent fuel efficiency of 99 miles per gallon. The Chevy Volt has an equivalent fuel efficiency rating of 93 miles per gallon.

You can watch a full version of the commercial below.