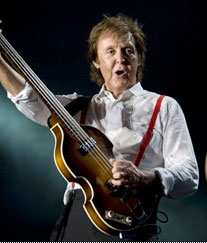 Buried somewhere across the Atlantic on a Financial Times blog is solid reportage from two major UK newspapers that refutes the rumors that Apple’s super-secret product launch on Wednesday will debut the Beatles’ music in Apple’s iTunes music store. EMI, Paul McCartney told a reporter, worries about being sued silly should the iTunes copies get widely pirated:

[Apple’s] San Francisco event will come the same day as the release of the remastered Beatles catalog, although that material itself won’t be available via Apple’s online store iTunes.

“Conversations between Apple and EMI are ongoing and we look forward to the day when we can make the music available digitally. But it’s not tomorrow,” Ernesto Schmitt, EMI’s global catalog  president, told the FT’s Andrew Edgecliffe-Johnson.

The holdup is EMI’s conern about the prospects for piracy, Paul McCartney told The Observer.

The ex-Beatle said he, Ringo Starr, Yoko Ono and Olivia Harrison wanted to release the music on iTunes, but EMI, which owns the master recordings, objected.

“If one [EMI] employee decides to take it home and wap it on to the internet, we would have the right to say, ‘Now you recompense us for that.’ And they’re scared of that,” Mr McCartney said. 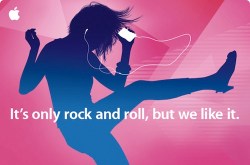 Instead, the Financial Times says Apple’s big reveal on Wednesday will be the project supposedly named Cocktail, an interactive multimedia wrapper for music that attempts to bring double-gatefold album art and extended liner notes into the 2010’s.

Apple’s tagline for the event borrows a Rolling Stones lyric, “It’s only rock and roll, but we like it.” So I’m still holding out for Mick Jagger.