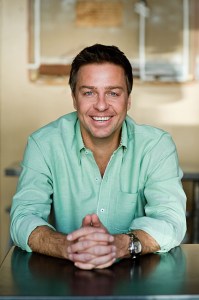 In a quiet deal announced last year, online travel conglomerate Expedia scooped up travel sites, VirtualTourist and OneTime, for undisclosed amounts. But I’ve recently learned that the final price totaled around $85 million — much more than I would have guessed. So I caught up with a cofounder of the companies, J.R. Johnson, to get the details. A serial entrepreneur in the midst of launching a new company (social review site Lunch.com, which recently came out of beta), Johnson has a classic survivor story.

In 1999, Johnson — then a practicing lawyer — was on a business trip to Germany when he met Tilman Reissfelder, a local entrepreneur experimenting with a travel site called vtourist. It was an early sort of destination site for travel information that was starting to show some usage. Johnson and Reissfelder got excited about the then-young idea of letting anyone share their travel experiences with fellow travelers, so Johnson quit his law job, and the two decided to expand the site to rely on this user-generated content. At that time, many people were relying on professionally written sites like Lonely Planet or on personal web pages on GeoCities.

Johnson then made, as he put it, the “genius strategical move” to not raise money until April 2000 — when the dot-com bubble really began bursting and funding dried up. With no revenue stream in sight, they were forced to lay off most of the staff. Reissfelder and a third co-founder they’d picked up, Giampiero Ambrosi, moved into a small apartment in Santa Monica, Calif. But more and more people were using the site, and they figured it’d be worth something one day. 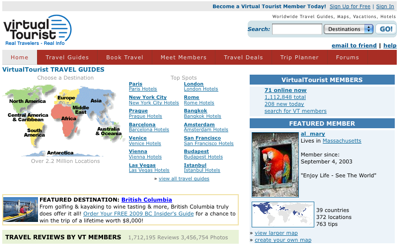 Around the same time, a company called GoTo.com was experimenting with running targeted ads within search engines (GoTo would eventually become Overture, the contextual ad company whose model was emulated by Google, and was eventually sold to Yahoo in 2003). Johnson said he spent nine months convincing GoTo to run ads not just in search engines but on his site. Eventually it did, and began making VirtualTourist money. By the summer of 2002, it was making enough to move the company out of the apartment and into a real office, and to begin hiring again. Google’s growth during the early part of this decade, and its introduction of AdSense and AdWords, became a key way it to make money in future years.

In 2004, as a sort of outgrowth of VirtualTourist, Johnson cofounded OneTime, a comparison travel booking service, in 2004, targeting advertisers who were looking for ads that would result in immediate bookings. By the time of the sale, which officially closed in June of 2008, VirtualTourist was getting five million monthly unique visitors and OneTime was getting a couple million uniques. By the time of the sale, he says, the two Manhattan Beach, Calif. based companies were both “extremely profitable.” By toughing it through the dark times during the early part of this decade, Johnson and his companies were able to capitalize on the growth the web — and web revenue — and get exits when sale prices were high.

Long fascinated by new ways of getting people to share information, Johnson and half the team from VirtualTourist have been working on a new company called Lunch.com. Launched a month ago, it’s designed to get real people sharing information with anyone else they have something in common with. You can rate and review books, movies, hiking trails (like the company video, below, discusses), and anything else. 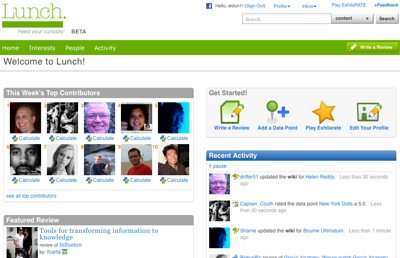 Of course, there are a wide range of sites that try to capture user reviews — and some, like Living Social on Facebook, have done a great job of using real-world connections to encourage real information sharing about a wide range of topics. So it’s not clear how Lunch.com is going to fare. But it does have the feel of a site that’s been carefully crafted in subtle ways that can make a big difference. The interface is simple, but manages to get you to share a lot of information pretty painlessly. When you first sign up, you’re funneled into sharing your tastes on subjects of your choice (in topics like Technology, TV Shows or Parenting) — list your favorites. The next screen gives you an assortment of media, foods, and random other things to rate. To encourage people to share their real identies, the site also lets you sign in using Facebook Connect, so your Facebook profile information will appear on the site.

Using the information you provide, Lunch.com compares your interests with other peoples and tells you how similar those interests are. Instead of manually becoming friends with people, like on other social networks, it generates what it calls a “similarity network.” You can see these people’s reviews, follow them to keep track of their new reviews.

Lunch.com is a slick new competitor in a crowded space. But the experienced team (and Johnson’s financial backing), could give it an edge.