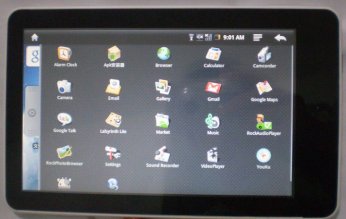 A rumored tablet computer being built by a company in Nigeria became more credible over the weekend, when the company posted photos of a prototype on Facebook.

(In case you’re unaware: Nigeria’s national language is English, and the country’s population is roughly half Muslim and half Christian. Go back and re-read those get-rich-quick offers from Nigeria in your inbox. Do they make more sense now?)

“Encipher, a growing technology consultancy based in the UK and founded by seasoned Nigerian technology entrepreneurs, Saheed Adepoju and Anibe Agamah is set to unveil the prototype of an Andriod powered tablet this weekend.”

In a later post, Okezie said that he had convinced Encipher’s founders to share the specs of their “work-in-progress” tablet. Its 7-inch 800×480-pixel touchscreen is smaller than Apple’s iPad. On the upside, a smaller screen may keep the device’s cost below Apple’s $500 entry level.

Encipher’s tablet runs on a Rockchip 2808 processor, with 512 megabytes of RAM and two gigabytes of solid-state file storage. The operating system is Google’s open-source Android. Wi-Fi is the only Internet connection available. There’s no Ethernet jack or 3G wireless.

Encipher doesn’t have a Web presence yet. But Adepoju told Okezie that Encipher’s business plan is to use the tablet as a means to sell cloud computing services — email, storage, backup, hosted desktops, VoIP phone service, and others.