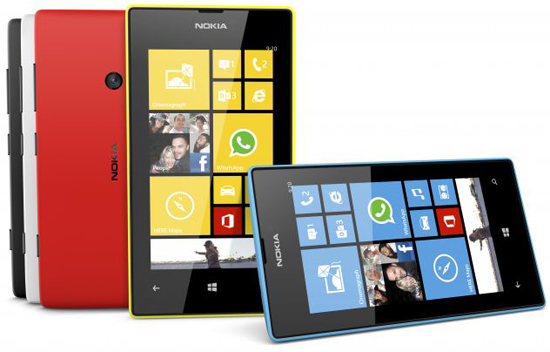 T-Mobile has revealed that it will exclusively offer the Windows 8-powered Nokia 521 device on its 4G network in the U.S. T-mobile has yet to announce availability and pricing, but the 521 is expected to go on the market in late spring or early summer.

Nokia launched four new phones today at Mobile World Congress, among them the Nokia Lumia 520. The 520 features a rounded back to fit in the palm, a 4-inch supersensitive screen, 8GB of storage, and a 5 megapixel camera.  The device will cost a mere 139 EUR ($184) without a contract.

At the slightly higher price point of 249 EUR ($331), the Nokia Lumia 720 delivers a HD-quality 6.7 megapixel camera with a flash designed to take clear pictures in low lighting conditions on your nights out. The 4.3-inch LCD display comes with a filter to reduce glare during outdoor use.

At the other end of the scale, Nokia also announced its cheapest device ever aimed at emerging markets. The bare bones Nokia 105 will cost a mere 15 EUR, has no camera, and sports a tiny 1.5-inch screen, but the upside of the pared-down feature set is that can run without a charge for up to 35 days (12.5 hours talk time). For the millions people who have no access to grid power, charging is a major consideration. It also sports its own flashlight and FM radio, essential tools in places like sub-Saharan Africa.