Nokia said today that it’s sharing its mapping technology with developers who want to create their own personalized map applications.

This move represents a shift for Nokia from offering its own services to becoming a platform for third-party location-based services. By layering services on top of its phones, and copying Apple’s strategy of connecting services to e-commerce on the phones, Nokia hopes to steal some of the iPhone’s thunder.

The shared platform could generate a bunch of new apps that are synchronized both on the web and on smart phones, creating competition for web-mapping players such as Google Maps and Mapquest. Beyond that, if the services make Nokia phones more desirable, Nokia can sell more phones.

There is a strategic advantage here. Nokia’s maps are already used across more than 200 million smart phones. It owns its own maps, and it owns its Ovi store, which can search for nearby goods based on its knowledge of exactly where you are. Because Nokia owns so much of the system, it can deliver value to its customers in ways that rivals can’t. Nokia, for instance, can give away maps for free on the phones that it sells. But Google will probably insist on being paid for its Google Maps services, which are used on the iPhone.

Speaking at the Where 2.0 conference in San Jose, Calif., Michael Halbherr, vice president of social location services at Nokia, said that the Ovi Maps Player API gives developers a new JavaScript-based version of the generic Ovi Maps that they can personalize. Developers can then insert their apps as widgets into web sites, enabling new services such as the ability to overlay bicycle routes onto a city transit map that includes train schedules. 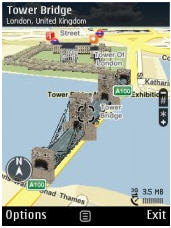 Developers can layer any sort of look they want onto the Ovi Maps product. They can put an accurate overhead satellite view on a map, or change it for a Google Maps-like street by street view. Or they can render a map from a 3-D view, with major landmarks highlighted as 3-D animated objects. In this picture, for instance, you can see London’s Tower Bridge rendered in 3-D on a street map.

The 3-D looks OK. But it doesn’t quite live up to the real imagery used in applications such as Google StreetView, which stitches photos together to render a 360 degree view of a place. Halbherr declined to comment on whether Nokia is working on something like Google StreetView.

Among those using the platform are travel sites like Lonely Planet, Michelin, and Wcities. Nokia has already built 3-D landmarks in more than 200 cities worldwide. When users visit maps of those cities, they can change the view by rotating or tilting the map or switching to a night time view. The underlying map technology comes from Navteq, which Nokia bought for $8 billion in 2007. Meanwhile, the map user interface comes from Gate-5, which Nokia acquired for $250 million in 2006.

With the new Ovi Maps app, users can map out pedestrian paths or vehicle paths, with real-time traffic integrated into the app. The maps are also integrated with the Ovi app store, which resembles Apple’s AppStore for the iPhone, which Nokia is rolling out this summer.