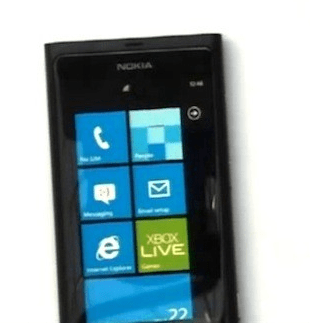 Sure, Nokia’s new N9 MeeGo phone is pretty, but what I’m really looking forward to is the company’s first Windows Phone 7 device. Now thanks to Nokia CEO Stephen Elop (and the company’s lax security), it appears we have our first glimpse.

Nokia showed off the Windows Phone 7 prototype, codenamed “Sea Ray,” to an industry crowd earlier this week. He asked attendees not to take pictures or video of the device, but judging from the leaked photos, the company didn’t enforce that restriction too well. Additionally, someone has released a video of the announcement to the web (see below).

The device doesn’t seem to be all that different from the N9. It sports a similar unibody design, which Nokia said offers improved reception and durability, and the front of the device is dominated by a large, curved touchscreen. It also looks to be running the new Mango version of Windows Phone.

I’m not entirely sure why Nokia didn’t show this phone off alongside the N9 — I’m assuming the company didn’t want it to steal the N9’s thunder. But at this point, Nokia doesn’t need to prove itself with its MeeGo operating system. That ship has passed. The company would be better off reminding us that its Windows Phone plans are on track, instead of trying to wow us with a phone that has no future.

Check out a short clip of Elop’s announcement below. A longer version of his presentation can be found here.