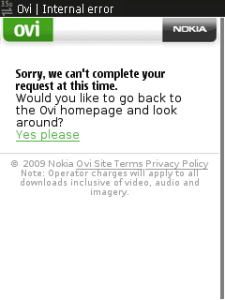 As soon as Nokia’s IT teams — surely they have more than one — began rolling out the company’s answer to Apple’s iTunes store last night, Ovi began spewing error messages. Terence Eden posted screenshots such as this one.

Nokia’s official Ovi Blog posted a sort-of explanation that apologized for the problems, and claimed that some had been solved by adding more servers. Isn’t that the IT department’s answer to everything?

Nokia was smart to make its mistakes before a small, technical audience before trying to drive mainstream consumers to the site with mass-media advertising. For us early adopters, complaining is part of the fun.

Willy today’s technical problems ruin the Ovi Store? The truth is they don’t matter. For an upstart company, a bug-ridden launch could mark the beginning of the end. But Nokia’s brand power is as big as its all-dominating market share. In my old job at Valleywag, I kept a running blog of Apple’s frequent customer-facing mistakes. Everyone laughed, then everyone bought an iPhone anyway.