North, a wearables company backed by Amazon and Intel, is making its smart glasses available to buy online for the first time.

Formerly known as Thalmic Labs, the Canadian startup pivoted from gesture- and motion-guided devices to augmented reality (AR) eyewear last year. At first, interested buyers could only purchase the $999 spectacles by booking an appointment online and then traveling to one of two brick-and-mortar stores in Toronto or New York to be professionally measured and fitted. A number of pop-up showrooms have also toured major cities across North America since launch, but this ultimately appeared too difficult to scale — online sales is where it’s at.

“Our flagship and pop-up showrooms have been a great opportunity to engage directly with, and learn from, our earliest customers, but we recognize our limited footprint represents a major barrier to customers outside of those locations,” noted North CEO and cofounder Stephen Lake. “Today’s announcement unlocks online access for Focals. With this release, we’ll bring everyday smart glasses to customers across the U.S. and Canada.”

By way of a brief recap, Focals connect to smartphones (iOS and Android) by Bluetooth, with a holographic lens displaying notifications and key information — such as weather — directly in the wearer’s field of view.

Focals also rely on a separate piece of hardware called Loop, a finger ring that  allows users to control the glasses with clicking motions. In effect, this means you don’t have to take your smartphone out of your pocket or push buttons on the glasses themselves — it’s all about being discreet. 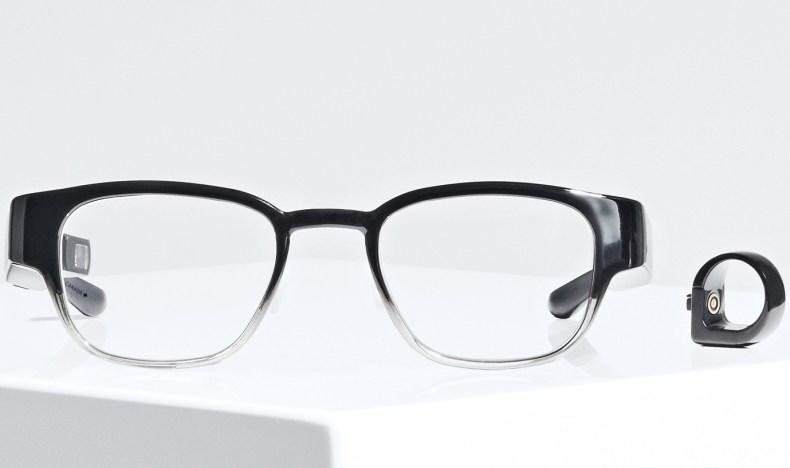 Above: Classic Focals with Loop

The main obstacle so far has been that the glasses need to be professionally measured for the user’s face and head, which makes online sales tricky. To overcome this issue, North has partnered with Standard Cyborg, a San Francisco-based startup that offers a 3D scanning and sensing API for third-party apps.

Available on iOS only for now, and compatible with iPhone X or higher due to its reliance on the TrueDepth camera (the same lens that’s used for FaceID), North’s new Focals Showroom app allows potential customers to take their own measurements. The user scans a picture of their face using the front-facing camera and then chooses which version of Focals they wish to purchase. 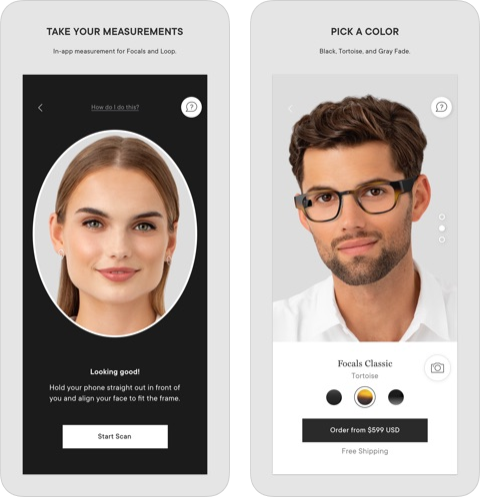 The shopper is given the option to customize the glasses with sun clips, for example, or they can upload their prescription before checking out. 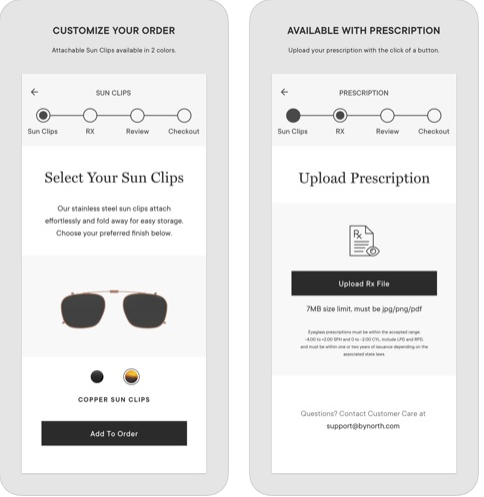 North hasn’t given any indication as to when it might be ready to develop a similar app for Android users.

“Our initial focus is making sure we can consistently deliver the right fit for Focals,” Lake told VentureBeat. “For now, this means using the iPhone X and newer, as our 3D scanning technology is validated and consistent on that platform.”

It’s worth noting that North isn’t pulling the plug on its brick-and-mortar hubs — users based in or around Toronto or Brooklyn can still come in for a human fitting, and the pop-up showrooms will still be a fixture moving forward. But the Showroom app widens Focals’ audience considerably — and the company promises to ship the spectacles within a few weeks of the online order.

Opening sales to the online masses also makes a global launch much more feasible, and while there are no concrete plans to expand Focals beyond North America at the moment, it could happen when the time is right.

“We’re launching the Focals Showroom app in the U.S. and Canada to start, with hopes to expand to new countries as soon as we’re ready,” Lake added.

Much has happened in the 12 months since Focals first went to market. In February, North scythed the price of the glasses almost in half to a $600 starting point. And then it laid off some 150 employees to cut costs. A month later, news emerged that North had raised $40 million in debt funding, its first known financing since it closed a chunky $120 million round from the likes of Intel Capital and Amazon’s Alexa Fund nearly three years ago.

In short, things haven’t looked great for North in the past six months. That’s why online sales could prove so important — allowing the company to scale more quickly and gain market traction. But the changes over the past year are also indicative of how North has had to evolve to find a market fit. To be viable, it has needed to move beyond its early-adopter niche and appeal to the broader eyewear market, where the base price is typically more affordable and consumers can choose to pay for add-ons, such as premium styles and colors.

On the surface, North’s most recent funding — which apparently came in the form of a convertible note — may indicate that investor interest has cooled since it secured its giant equity round back in 2016. But Lake is adamant that the caliber of backers is still notable, with the likes of Amazon and Intel reportedly returning to the table.

“While we did not announce specifics of the financing earlier this year, some of the most sophisticated technology investors in the world making very significant investments into North should be seen for what it is — a very strong vote of confidence in our vision of everyday all-day smart glasses,” Lake said. “In a market segment where we’ve seen numerous failures over the past year, North has raised capital, is continuing to invest aggressively, and has the only smart glasses product used each and every day by real people across the U.S. and Canada.”