As Nreal moves closer to the consumer launch of its Light AR glasses, it’s continuing to bolster the wearable’s software capabilities with features that will appeal to end users. Today, the company announced that it’s adding Clay AIR’s high-fidelity optical hand tracking solution to the glasses, as well as expanding the platform’s cellular carrier support and apps.

In previous demonstrations of Light, Nreal has generally used a tethered Android phone as a controller, enabling users to move the device around or touch its screen to interact with AR objects viewed in the glasses. But some demos hinted that a hand tracking interface would also be available, enabling users to gesture in front of the glasses to touch buttons and grasp virtual items.

“We don’t believe that there’s a single best way to interact with MR,” explained Nreal CEO Chi Xu, “and in fact could be a combination of control options at once, but we want to offer developers and users the choice to decide what’s best for them.” 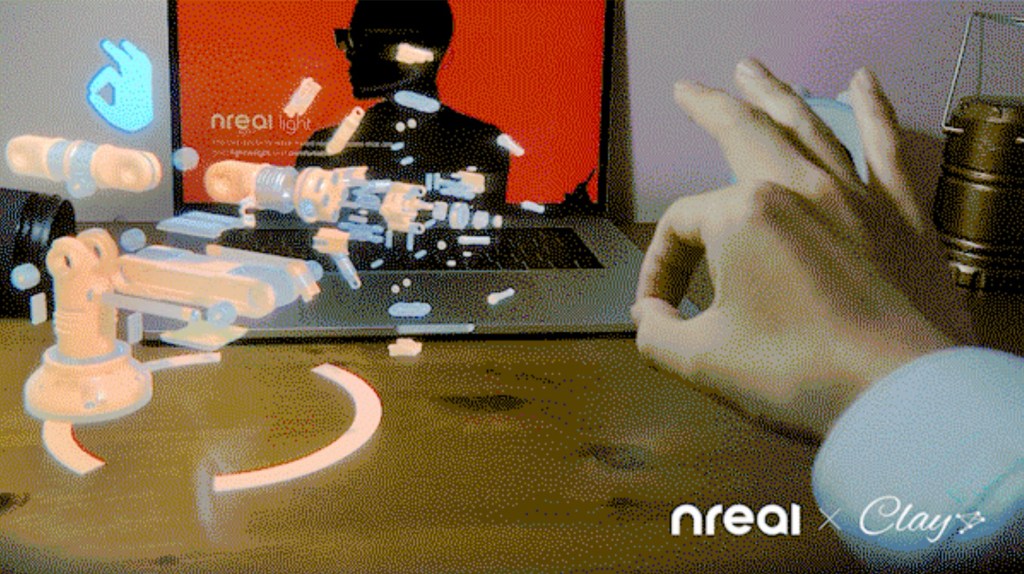 Nreal’s choice of Clay AIR enables the glasses to support pinching, pointing, zooming, grabbing, and swiping of AR objects, while displaying dynamic real-time hand skeleton overlays atop the user’s real hands — similar to the optical hand tracking seen recently in the Oculus Quest. Assuming the connected phone uses a Qualcomm Snapdragon 855 or 865 processor, hand rendering will be smooth, with the option to display full hands, individual fingers, or other custom skins instead of skeletons. The companies claim that the tracking and rendering features collectively have only a modest impact on battery life.

“We strongly believe that mixed reality and spatial computing will soon transform our lives,” said Deutsche Telekom SVP Omar Tazi. “Deutsche Telekom together with Nreal will unleash the full potential of mixed reality to demonstrate the unlimited potential that 5G can offer to both consumers and professionals.” The carrier plans to offer 5G connectivity, edge computing, and content including concerts, sports events, and games for Light, helping Nreal to “unleash the full potential of mixed reality.”

Announced in January, Nreal’s Nebula launcher system will serve as a 3D hub for new Light-specific apps running on Android, as well as 2D Android apps users want to see through the AR glasses. The company said last month that it’s working with Spatial to bring the collaborative work and social app to Light; it’s also exploring mixed reality workspace options with Datamesh.

Nreal’s $499 Light consumer kit is still planned for release during the second quarter of this year. A developer edition is already available for $1,199.