Home intercom and touchscreen tablet company Nucleus will incorporate Alexa and its many skills and voice commands into its devices, the company announced today. 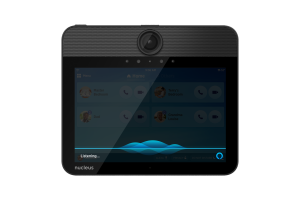 Available for purchase for the first time today, each Nucleus touchscreen tablet retails at $249, and each additional tablet is $199. These can be purchased on Amazon.com or at Lowe’s. The touchscreen intercom has been available for preorder since its public debut on the Today Show in 2014.

Nucleus uses HD video and microphones to connect people in the same home but in different rooms. Nucleus can also work for inter-home communication to keep an eye on elderly parents from afar or to keep the line open with family members.

Like Echo, Nucleus interacts with Alexa through voice, as part of Alexa Voice Service integration.

With Alexa, Nucleus can reach beyond being simply an intercom to connect with several Internet of Things devices, like smart locks and Wi-Fi video doorbells, however, existing Amazon Echo devices will not sync with Nucleus, an Amazon spokesperson said.

While you’re away from home, Nucleus works with iOS and Android apps.

In January, Nucleus started a national partnership with Lowe’s and was chosen to be part of the Amazon Launchpad program, which was developed to support promising startups. Nucleus was created by Jonathan Frankel, a computer science major and rabbi living in Philadelphia. Cofounder Isaac Levy helped create Google Hangouts.

Nucleus is based in New York City, with offices in Philadelphia and New Jersey, and has raised $3.7 million in seed from Anthiem Ventures, FF Angel, Foxconn, and Red Sea Ventures.