You can’t play as Harry Potter in virtual reality yet. But the next best thing is Wands, a spellcasting VR game where you can duel with another player in a fantasy universe. This first VR title from Stockholm-based Nux Studios debuted August 18, and it shot to the top of the Samsung Gear VR app store.

This kind of game, which is set in 1880s London with a steampunk art style, is a natural for VR, because you’re waving a wand and being active. You play as a magic user, casting spells. I played it on the Samsung Gear VR headset and thoroughly enjoyed it. With the Gear VR, all you do to cast your spells is look at your target and then tap the button on the side of the headset to fire. You have to spin around to see where the enemy is.

The action in the player-versus-player game is pretty fast. You can’t move around in the VR spaces, such as a medieval dungeon or a big library. Instead, you teleport to a location by looking at it and hitting a button. You can move around quickly from teleportation spots, and you can attempt to sneak up behind your enemy and fire a spell. 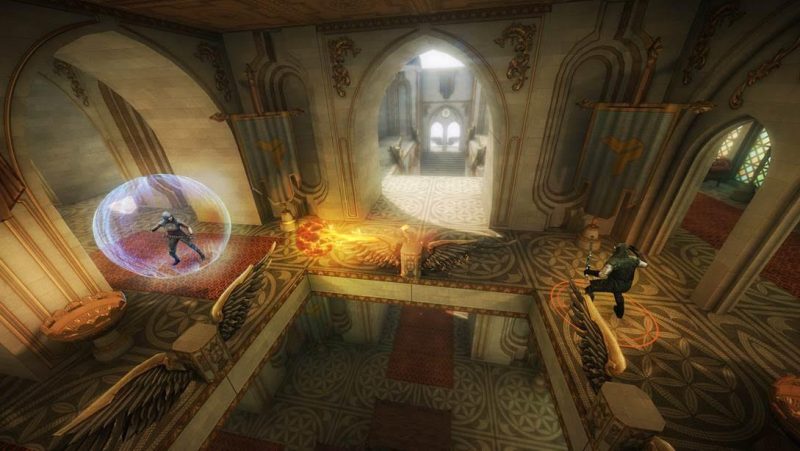 Above: Wands lets players cast fireballs and other spells at each other.

“VR is a lonely experience right now,” said Nux Studios producer Ricky Helgesson in an interview with GamesBeat. “So we decided to make it social with player-versus-player multiplayer, and spectator modes.”

The quality of the $6 experience is great, especially for a mobile VR game. It feels magical. Not only can you play, but you can also be a spectator, watching a match and competing against friends on a leaderboard.

First, you have to choose about five spells from a library of 15. Then you go into the VR battleground, to a mystical portal. I played against Helgesson. I fooled him a couple of times by sending out a decoy to a teleportation spot. He attacked my double, and managed to shoot himself as a result. I came up behind him and blasted him with my meteor spell.

The game doesn’t consume a lot of battery power, so you can play with your mobile phone in the headset for quite a while. It won’t make you dizzy. These little details show that Nux took a lot of care over the two years it took the team of five to make the game.

“It’s very good to play spectator mode and connect the screen to a TV,” Helgesson said.