Nvidia chief executive Jen-Hsun Huang has ridden the game industry to glory in the graphics chip business. But now those chips are being used for more than just games. They’re supplying the computational power for deep-learning artificial intelligence computing. And Nvidia now has a software development kit for deep-learning A.I. developers.

That software kit will enable developers to create better deep-learning applications to solve problems such as enabling self-driving cars to recognize pedestrians. Nvidia is creating its own deep-learning chip and technology for self-driving cars, Huang said in a keynote speech at the GPUTech conference in San Jose, California.

“We love games and we love graphics,” said Huang, who noted games “have pushed 3D graphics for 25 years.”

Huang said that five years ago, the “Big Bang of A.I.” happened as deep-learning neural networks were combined with Nvidia graphics processing units (GPUs). Now Huang believes deep learning is such a big deal that it will consume an enormous amount of computing power. We’re seeing huge advances in language processing as well as small things, such as robots learning how to screw on bottle caps, thanks to deep learning, Huang said.

Nvidia now has all sorts of projects under way using its “Works” naming system. Nvidia VRWorks, for instance, accelerates software running on GPUs. Any latency in motion graphics with VR can cause someone to get sick. 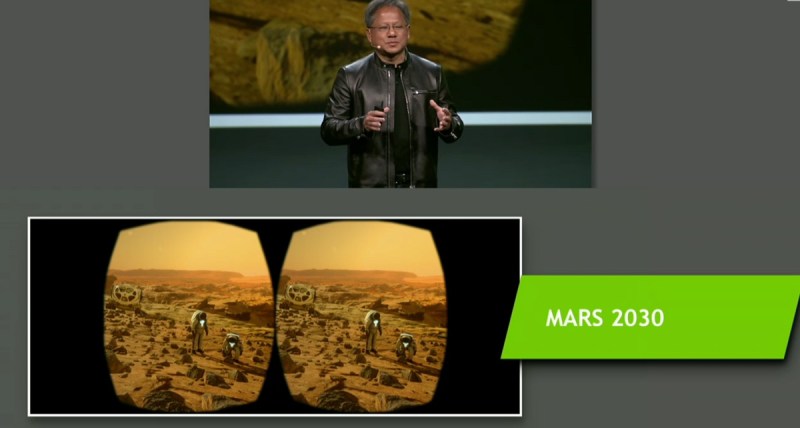 Above: Mars recreated in VR.

“VR is not just a new gadget,” he said. “It’s a brand new computing platform. It is changing how we design and experience products. You could use it to design a car in a virtual show room. You could be standing next to a car.”

VR can take you to places like Mount Everest, where you can check out the view in VR for a place that you’re probably never going to visit in real life. The Everest VR simulation takes 14,000 photos and reconstructs Everest in amazing realistic detail, Huang said.

“That’s a place I can only dream of going,” Huang said.

Developers have also meticulously recreated 8 square kilometers of the Mars landscape in VR. They’re also visualizing underground caverns in Mars that you can only see in virtual form.

Steve Wozniak, cofounder of Apple, demonstrated the Mars demo during the live keynote. Wozniak said it was amazing, but that he was getting dizzy and was going to fall off his chair. Mars2030 was created by Fusion in collaboration with Nvidia. The creator of the project is Julian Reyes, Lead VR producer at Fusion. 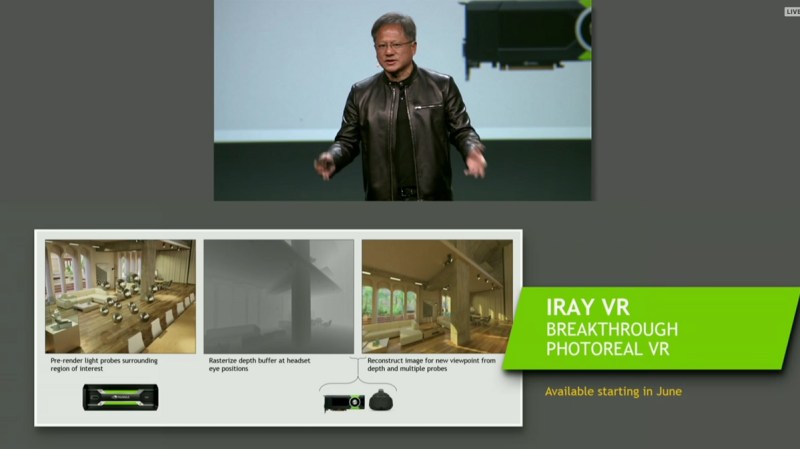 Nvidia announced a new Iray VR technology to create supercomputer-like photoreal imagery within VR. Huang said it was “Pixar-like” technology. He used Iray VR to show off the inside of a brand-new 500,000-square-foot Nvidia building that will house a couple of thousand employees. The building has underground parking, and Huang said that one of these days, the cars will park themselves in the underground parking garage after dropping employees off at the front door.

“This is unbelievable for people doing architectural walkthroughs,” he said.

Iray VR lite is the “little brother of Iray,” and it allows you to create a photosphere that is completely ray-traced and viewable by something as simple as Google Cardboard.

“Until now it was clear our GPUs are incredibly good at training networks,” he said. “We accelerate training by a factor of 10 or 20.”