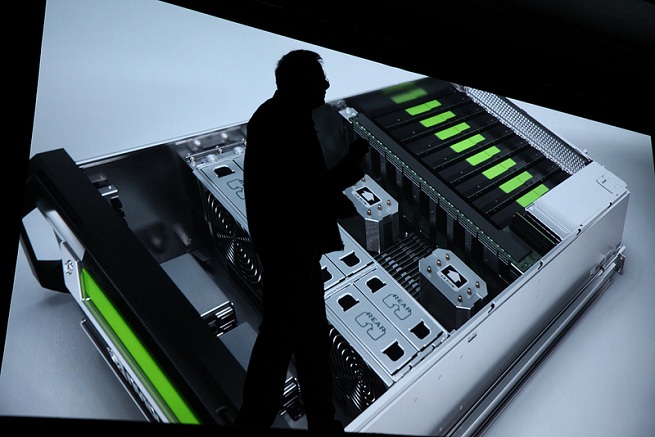 Nvidia has become a big advocate of cloud computing via a huge grid of processors (with graphics chips included) in data centers. And today, the world’s biggest standalone graphics chip maker announced that it will introduce its own server to enable that cloud computing.

Nvidia chief executive Jen-Hsun Huang launched the Nvidia Grid Visual Computing Appliance, or Grid VCA, at the company’s GPU Tech conference. This complete system is a full computer server, which companies can use in racks of computers in data centers that run complex visual applications that users can simply log in to.

That means the users don’t need to have powerful PCs of their own to run applications such as cloud-based games, Huang said.

The move shows that Nvidia is willing to move directly to the market rather than go through partners such as Hewlett-Packard or Dell. At the same time, Nvidia’s has 75 partners for its Grid computing technology, including Dell and HP. Nvidia is more willing to run the risk of angering its customers; in January, the company announced Project Shield, a handheld gaming device that it will sell direct to consumers. (It’s a complicated world).

The Grid VCA server can be stacked four units high. Each unit has two high-performance Intel Xeon processors, each capable of handling 16 threads, or programs, at a time. Each server also has eight Grid graphics cards. And each of those has two Kepler-based graphics chips, or graphics processing units (GPUs). For a cloud gaming service, this would be a big deal. One server could handle 16 games, rather than just one. That makes cloud gaming much more economical, Huang said. But this particular system may not be targeted at cloud gaming.

Dell, HP and IBM are offering Nvidia Grid-based servers. Citrix, Microsoft and VMware are offering software for it. Grid VCA costs at prices ranging from $24,900 to $39,900.

“Nvidia is going vertical with Grid VCA,” said Patrick Moorhead, an analyst at Moor Insights & Strategy. “Like Shield, Nvidia is developing a complete, top to bottom solution. It’s hard to tell the incremental enterprise value Nvidia brings to the table over and above HP and Dell with the 4 unit appliance, but hopefully this will become more evident as time goes on.”

Nvidia is targeting folks who want benefits of virtualization and cloud but don’t have the benefits of information technology (IT) service personnel, said Jeff Brown, head of the Grid business.