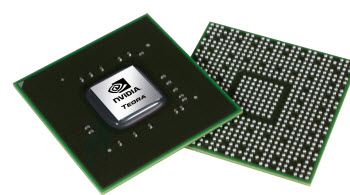 The new chip, unveiled at the Consumer Electronics Show, means that portable devices will not only be able to play high-definition video — which is possible with the original Tegra launched in the middle of last year — it will also enable users to watch hours of HD video streamed to their devices over a web connection, said Michael Rayfield, general manager of Nvidia’s mobile products division.

He said that dozens of companies are preparing to launch Tegra-based gadgets in 2010. But there are also companies evaluating Tegra 2 now that will also launch Tegra 2-based machines this year. These devices include lots of web-connected tablet computers (he wouldn’t comment on whether Apple is using one in its rumored device), media players, mobile internet devices (which fit in your pocket), car devices, and smartphones. 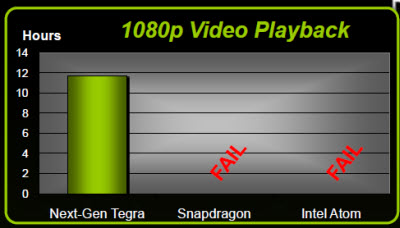 The Tegra devices are targeted at gadgets with displays that are 5 inches to 10 inches diagonally, touch capable, less than an inch thick, with cameras and connection to the web via Wi-Fi or 3G. Rayfield said there are hundreds of development systems among potential customers now — an indication of products being launched sometime soon.

Tegra 2 will be ten times more powerful than the average smart phone and four times the performance of the original Tegra, but it won’t consume any more power. It should be able to stream web video for six hours or play stored 1080p video for 12 hours. The Tegra chips should be able to work with Google’s Android operating system or various Microsoft operating systems like Windows Mobile. Android-based devices probably won’t arrive until the second quarter. If there’s a distinction between the devices, the Tegra will likely appear in smartphones while the Tegra 2 will appear in tablets. The Tegra 2 uses 20 times less power than a typical PC. It is the work of more than 500 engineers.

The costs of Tegra-based gadgets are likely to be a lot less than netbooks, which are smaller than laptops and are meant for surfing the web. Rayfield said pricing is up to the customers, but it’s conceivable that gadgets using the Tegra or Tegra 2 chips could sell for $200 or $300. The original Tegra was made with a 65-nanometer manufacturing process, while the Tegra 2 will be made with a more advanced 40-nanometer process. The original Tegra made it into Microsoft’s Zune HD portable media player.