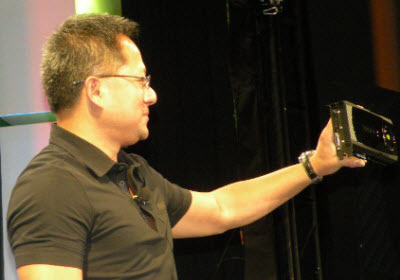 Nvidia announced today that it has created a next-generation graphics chip, code-named Fermi, that is crucial to the future of the company and its crusade to spread graphics computing beyond graphics.

Jen-Hsun Huang, chief executive of Nvidia, introduced the chip at the company’s GPU Technology conference in San Jose, Calif., this afternoon. He said the chip has more than 3 billion transistors and has 512 parallel processors, or more than twice the number from last year’s chip.

The chip will create ungodly beautiful graphics for gamers, but it will also be aimed at scientists doing elaborate simulations of global warming, the weather, and other things that only supercomputers could once do. Nvidia refers to this as “GPU computing,” after graphics processing unit. It represents Nvidia’s big bet that its graphics chips can remain relevant in an age when Intel’s microprocessors and its companion chips are trying to do all processing in a personal computer.

When Nvidia ships Fermi is critical for its finances. Last year, Nvidia came up with a power-hungry and expensive new chip. Advanced Micro Devices outfoxed Nvidia by doing a less-expensive, low-power and easier to manufacture chip that had good enough performance. As a result, AMD gained market share and Nvidia fell behind. That was particularly hard since Nvidia was also dealing with a huge inventory correction as a result of a fall off in demand due to the recession.

That scenario looked like it was about to play itself out again. AMD launched its powerful but power efficient graphics chip in the past week. Those chips are being designed into a number of new computers such as new models from Alienware, but production quantities seem to be light. AMD crowed at the time that it had created the world’s fastest graphics chip, and Nvidia couldn’t answer with talk of its own new chip.

Now Nvidia looks like it’s ready, or close to being ready. Huang said the company has working silicon, meaning the chip prototypes are done and working. He held up a Fermi graphics card (above), which houses the chip and can be inserted into a computer as an add-on board.

Still, it can take a long time to get the prototypes into mass production and to ship them to computer makers and users. That means that AMD could very well enjoy a full season of selling its new graphics chips against Nvidia’s old graphics chips. 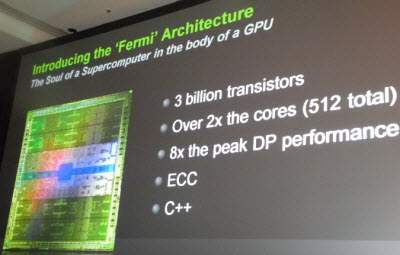 “I look forward to shipping Fermi in the near future,” Huang said. “Today, I’m going to ask you to wait a little longer.”

[Update: In a press conference after the speech, Huang said that you can expect to see Fermi-based products launch in a “few short months.” That means Nvidia will be behind AMD by a number of months. Regarding that, Huang added, “Nobody likes it when the competitor has a product and we don’t. We have a different vision. I don’t like to keep our enthusiasts waiting for our next-generation processor. But if we are behind a couple of months, it’s not going to matter.” Huang said that Fermi-based chip designs will become part of all of Nvidia’s future product lines. Huang did not explain why it took Nvidia to design its newest chips than AMD].

The Fermi chip’s 3 billion transistors make it the most complex chip ever designed, Huang said. It compares to AMD’s ATI Radeon 5800 series chips which have 2.15 billion transistors. The Nvidia chip is big in part because it exploits Nvidia’s CUDA programming environment, which uses a graphics chip’s processors for non-graphics tasks. Huang believes that CUDA is the path for Nvidia’s chips to be used much more pervasively in a variety of purposes, such as medical imaging and video encoding.

Nvidia said Fermi chips will be eight times faster at certain math calcuations than its older chips. Peter Glaskowsky, a chip analyst, said that it’s not yet clear whether Nvidia’s chips are more powerful than AMD’s. At raw graphics, it’s quite possible that AMD’s 2.7-teraflop chips could be faster. But Nvidia’s chips can do more non-graphics tasks, particularly if more software materializes using CUDA. And Nvidia might also have an edge in doing realistic physics processing. So it could be hard to tell which chip vendor will come out on top in performance.

Huang said one competitive advantage is that Nvidia is releasing Nexus, a debugging tool that is integrated into Microsoft’s Visual Studio programming software. That will make it easier to create and debug applications that run on the chip.